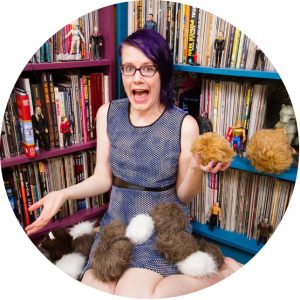 Erica McGillivray is an author and a marketing, communications, and community consultant. They engage, inform, and strategically guide brands and their audiences by leveraging their unique perspective from e-commerce retail, nonprofits, b2b, and pop culture. Erica brings a community focus to their team and a passion for diversity, equity, and inclusion to every program.

Erica’s often the solution thrown at a diverse array of company needs with broad experience in B2B SaaS, B2C e-commerce, professional associations, and nonprofits. They are currently working as Communications Director at NLM Photonics, a startup focused on revolutionizing the computing and networking industry with photonics. Though you’ll often find them in their garden or hosting their film podcast.

Erica previously served as the Co-Founder and COO at 1Brand and Permanence Labs. There, they launched the saas brand marketing tool, 1Brand, where any brand could enter their URL and populate basic visual branding guidelines. Erica managed Operations, including, but not limited to, company strategy, branding, finance, HR and people functions, legal, and systems processes.

Erica was a senior community manager at Moz, building the beloved online marketing brand’s community to 600,000 members and over 2 million monthly visitors. They honed Q&A forums, user-generated content, social media, webinars, and events, including developing and growing one of the top-rated online marketing conferences MozCon with 1,600 attendees.

Erica is also co-founder of GeekGirlCon, a 501c3 nonprofit celebrating geeky women. They served as President for over two years, forming the brand, business, and community from scratch with a team of 30+ volunteers. Erica launched their flagship conference with 1,200 attendees and doubled that the following year.

Embracing Your Community Both Online and Off with Erica McGillivray
Brand Driven Digital, 2016

Take Your Presentations to the Next Level, Great Tips from Erica McGillivray
AuthorityLabs, 2014

I am GeekGirlCon, Hear me ROAR!
Comic Booked, 2011