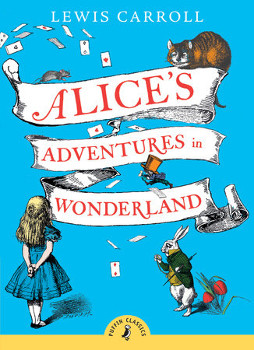 This was perhaps a bit of cheat when it comes to nature of the challenge. I’m not one to go back and reread books at the moment. (I have reread my three favorite childhood books as an adult.) Instead, I picked a book that I wanted to read, which I’d never read the proper version of. Of course, I’ve watched Disney’s Alice in Wonderland, the animated children’s movie from 1952, and read books based on that telling.

Carroll’s Alice’s Adventures in Wonderland reads like a surrealist novel for children. Or the beginnings of what would become fantastical surrealism. Carroll definitely foreshadows future literary techniques, but I’m still a little puzzled over Alice’s Adventures in Wonderland’s continuing popularity, and I’d bet Disney has helped with that. Disney is certainly why I read it.

Every character, except seven-year-old Alice herself, acts as if they are on a great many drugs. Which hallucinogenic mushrooms certainly contributed to Carroll’s inspiration for the story. While reading this, I did long for more standardization of grammar rules than at the time of Carroll’s writing.

Alice is an easy character to be won over by. Girl is obsessed with her cat Dinah. I’m sure at that age, I was just as animated about my own number one topic: my cat. She makes the other small animals (birds, mice, etc.) frightened of her by talking about how she wants to take them all to meet Dinah, who is a really great hunter. Basically all the animals Alice meets, she either terrorizes them of stories of Dinah or mentioning that she only knows of that animal because it’s shown up on her plate.

I was surprised to find myself 20% of the way through the book and only have Alice encounter the White Rabbit, fall down the hole, play with the different bottles to change size, and then end up listening to stories of the other animals. She hasn’t yet met the more famous and lasting characters, except for the White Rabbit.

Alice spends a lot of time perfecting how to change sizes. She complains a lot about how the perspective shifts make her feel like an entirely different person — no doubt analogous to childhood growing pains — and also gives her some vertigo. Alice gets stuck inside the White Rabbit’s house. Once Alice has mastered size shifting, she immediately shrinks down and runs into the first house she sees. It’s the Duchess’ house.

The Duchess engages in some child abuse — hitting a child — with a cook who’s causing allergic reactions by putting too much pepper in the soup. I’m not sure what this is supposed to symbolize. Especially when the child turns out to be a pig. Alice has put herself in yet another situation with horrible characters and where she wants to immediately get out of it.

Here the Cheshire Cat — the second famous Alice character — appears and disappears. Alice loves Cheshire Cat because she’s a cat lady in training. The Cheshire Cat is her friend, not an antagonist on her journey. The Cheshire Cat even later appears with information vital to Alice’s understanding of this world and the Queen of Hearts.

The infamous mad tea party is where Alice ends up next. Everyone — the Mad Hatter, the March Hare, and the Dormouse — are higher than I expected. Also, I’m the Dormouse on weed. Just falling asleep and making other deliver me snacks.

Their table, where they move from seat to seat as to avoid cleaning, does remind me of a college houses. They offend Alice immediately. Which falls back into her pattern of meeting Wonderland characters.

Alice gets her first glances at the Queen of Hearts, who’s targeting everyone for her beheading. We quickly find out no one is actually beheaded as the King of Hearts pardons all of them. This lowers the stakes of the situation, and certainly defangs the Queen of Hearts.

However, the Cheshire Cat — in true cat form — is the only one to mock the Queen of Hearts to her face and her endless games of croquet. The Cheshire Cat disappears at its own whim. No one wins or really loses the game as she calls for their heads. Except Alice who struggles with flamingo having a mind of its own.

Alice then flies away with a gryphon to meet the sea animals. As “dormouse” and “gryphon” are homonyms, I wonder if Carroll made his animal choices for song rhyming purposes. I have to admit ever since reading Lords of the Rings, I tend to glaze over songs in novels.

Then it becomes time for beheading court. Does Alice not know about court procedures because she’s seven or because of the patriarchy? Women were not allowed to serve on juries, be a judge, or lawyer at this time. I blame the patriarchy.

In her seat in the stands, Alice starts to spontaneously grow. She’s cautious about smashing the other creatures. But here, her out-of-sorts nature reminds me more of childhood growing pains than eating some magic mushrooms.

Alice then wakes up from her dream. She’s been asleep on her sister’s lap the whole time. Carroll then decides to change the book’s point-of-view to her sister to close out. Which is an odd choice in an odd book.

The ending makes me question more about how Alice’s Adventures in Wonderland survived in literature canon. Yes, it predicts surrealist tradition, and well, writings on magic mushrooms and other drugs. But I doubt it would be as well known in popular culture without the big helping hand of Disney. I would have not cosplayed Alice without the hand of Disney. I probably wouldn’t be reading this without Disney.