Ah, the three star, right in the middle. Some three stars books are there because they’re slightly disappointing. Others get three stars because they’re interesting and decent, but not quite great. They may even be the start of a series I will enjoy greatly, but they’re by first time novelists or finding their footing.

My late 2018 summer reading was full of three out of five stars. And let me be clear, all of these books, I’m very likely to continue reading the series (if applicable) and following the author’s work. 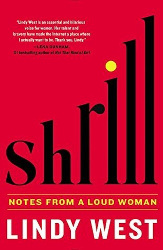 Shrill by Lindy West
Rating: 3/5 stars
#52Challenge: a book that makes you laugh out loud

West never fails to get a laugh while making her point. In many ways, West was my introduction to funny comedians who happen to be women. I’ve lived in the PNW my entire life, and spent over 15 years in the greater Seattle area. I read many of these essays in this book — or the ones she narrates and adds fresh perspective to — as they were being published.

I don’t say this to have a hipster brag on her writing, but to share a three star reason: I wanted fresh stories. The times I felt myself most pulled in by Shrill were the stories I didn’t know. Which were some of the most personal about her romance with her husband and how to have adult relationships with someone whose life experiences are very different from yours.

West’s unapologetic take on body positivity and fat acceptance are groundbreaking, and same with her takedown of rape jokes and defense of women comedians. As a woman who routinely brings up uncomfortable subjects with coworkers, bosses, family, friends, and yes, sometimes strangers on the internet — West is a role model in how not to swallow your pain, be forced to bare shame and conform, or just cut the entire world out.

The Ice Princess (Patrik Hedström #1) by Camilla Läckberg
Rating: 3/5 stars
#52Challenge: a book with a character who shares your name

We’re primed to like people with our names, and the main character in this novel’s name is Erica. Plus, on a hot summer’s day, there’s nothing better to cool you down than a mystery set in a snowy small Swedish town. At least, I’m very affected by media set in extreme temperatures.

Läckberg is one of Sweden’s most popular novelists — if not, the most popular — and her books are extremely well-known and famous there. I picked this up a couple years ago at the now defunct Seattle Mystery Bookstore (RIP!) on their recommendation. The plot is interesting, and revolves around the type of small town drama where one party tries to bury secrets — sometimes literally! — and the other tries to set them free. It always cracks me up when people try to save face in front of friends and neighbors through murder.

The three stars comes from two factors. One, the book starts off with Erica in a very Bridget Jones’ style mood. She’s worried about her weight, about her eating, about her clothing, about her lack of boyfriend, when the book starts off with her finding the dead body of her childhood best friend. Worry about the murder! Two, when characters discover big secrets, they tell you they discovered something huge, but what they discovered is not revealed until several chapters later. This would be more annoying if the mystery pieces were harder to put together. While I didn’t guess the killer until almost the end, I did pick up the other pieces immediately.

I’ll be giving the next book a read. 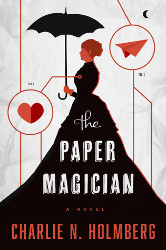 The Paper Magician #1 by Charlie N. Holmberg
Rating: 3/5 stars
#52Challenge: a book written by someone under 30

Out of my three star parade, The Paper Magician is probably the one I’m least interested in reading the next one. However, I listened to the audiobook with my partner, which means the next time we roadtrip together, he’ll put on the second one.

Holmberg’s world building is the best part of the series. (Okay, Fennel, the paper dog, is also a favorite.) She sets up a magic system where magics must come from something human-engineered such as paper, glass, metal work, etc. Her main hero Ceony is a novice paper magician, who through learning her art teaches us the rules and creativity of what paper can do.

My three stars are because the characters didn’t grab me, and the villainy was very stereotypical. Also, there’s a tacked on love story thread, which is unneeded and has some bad power dynamics. I kind of hope the future books won’t go there, but… they probably will. Disney has bought the rights to the series, and if anything comes of it, I will be curious to see how they deal with some of the gruesome violence and that romance plot.

Magic to the Bone (Allie Beckstrom #1) by Devon Monk
Rating: 3/5 stars
#52Challenge: a book already on your bookshelf

I’m always a sucker for a book set in the Pacific Northwest. This one takes place mostly in Portland with a little cameo of Burns, Oregon. Monk builds a world with a unique take on magic as a commodity, as an economy, as something “discovered” only 30 years ago, and as something you cannot use without negative feedback of illness and pain.

Monk’s Portland is both a familiar one, but also one unknown through transformation by magic. In the ways tech has gentrified all of Portland and displaced the working class, magic gentrifies all but the areas of North Portland (where IRL poc were redlined to) which is magic “free.” This book hints at classism and racism — our heroine Allie comes from an extremely wealthy, white magical tech family, but has rejected them — but the narrative never really goes there. Even with the additions of Allie’s love interest/boyfriend Zayvion being a black man and her best friend Nola, a white woman, being a farmer who rejects magic and lives beyond its reach.

Monk is a solid action writer when it comes to drawing you in. I did want more, and read this book rapidly through her easy prose and intriguing twists. The central mystery wasn’t overly complex, and the book leaves it solved with a whole host of other mysteries opened up. And yes, spoilers, the kitten lives. 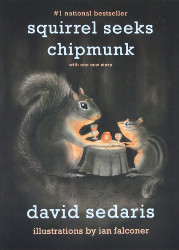 I heard Sedaris’ “Santaland Diaries” by chance, so many years, on NPR’s This American Life while outside cleaning rabbit cages. I laughed at his sardonic humor, and as a queer teenager, clung to some hope that there were others like me. Sedaris’ memoirist stories have been with me for a long-time, so I was curious to read his fiction.

Of course, Sedaris’ animal characters are much too human. They are your neighbors. They are your aunt and uncle. They are the annoying person shoving their way to board a plane when there are still two zones to board before theirs. They are, probably, real people Sedaris doesn’t want to humiliate by calling them out personally. With some animal-specific flares.

My favorite story was the last one — “The Grieving Owl” — which is both the relatable tale of the smart one in a family who doesn’t value intelligence or curiosity about the world and about trying to live a different way. But, of course, I also think Sedaris may have started this story with the note of “why do people put gerbils in their assholes?”

My three stars is because in the era of Trump, Sedaris’ sardonic nature left me more depressed than humored. That, for most of the stories, nothing changes, no one deserves a change, and life just continues on bedraggled. I needed a bit more hope from these animals.