If you don’t already have them on your shelf or on your to-read list. 🙂

Genre: Intersectional feminist comics, sci-fi, fills my heart with glee
Recommended for: EVERYONE (who gives a fuck about social justice and rad comics)

I’ve probably told everyone to read this comic this year. READ THIS COMIC. Bitch Planet rifts on ’70s prison exploitation movies and totalitarianism, particularly the control of women. Non-compliant women, as they are called, are shipped off to a prison-in-space colloquially known as Bitch Planet. Some of them have committed crimes we might consider valid reasons to go to prison — murder, theft, etc. — but many are there because they talked back to their husbands, because they were too fat, too gay, too stubborn, too outspoken, too brown, etc., and it’s those women’s stories that make Bitch Planet stand out as not too far from our own reality. 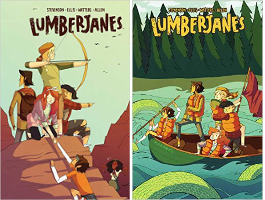 Genre: YA comics, female friendship to the max, camp songs
Recommended for: EVERYONE (no, literally everyone)

Volume 1 came in as my #1 read, so not surprising to see 2 and 3 come up high on the list. Lumberjanes remains a book full of heart and love, centered around the friendships of young girls. Though as the cast expands, we learn about the friendships of adult women and add some boys too. The book takes place at a camp and focuses on adventure and fun. The quality of the story is maintained through all the new additions.

Genre: Magical realism, thrillers, fiction set in South Africa
Recommended for: EVERYONE (who wants the dæmons in His Dark Materials to have a darker meaning)

I’ve wanted to read something by Lauren Beukes since I read her Fairest comic book miniseries. Several years ago, I traveled to South Africa, which instantly became of my favorite places in the world and somewhere I wanted to learn/read about. This book explores the concept of sin, particularly the sin of murder, and what if when someone murdered someone — regardless of situation and if in cold-blood or accident or self-defense — they were ‘burdened’ with a random animal (anything from a bear to a beetle). The lead character Zinzi is animated with a sloth and has a sixth sense to find lost items. When that lost item is a pair of teenagers, her live gets further turned upside down. 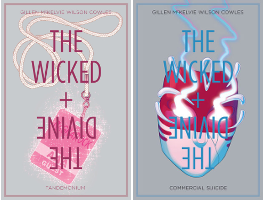 Genre: Music comics, ancient gods and teenagers, experimental phases
Recommended for: EVERYONE (who’s thought their favorite rockstar was a god)

The world Gillen and McKelvie have built here makes this book one of my must reads each time a new issue comes out. The first volume was on my 2014 list, and 2015 volumes continue in earnest. The brief premise is that every 90 years or so, ancient gods (with powers and all) are reincarnated into teenagers/young adults, and in our modern world, they are rock stars. Worship, fandom, and chaos ensues. 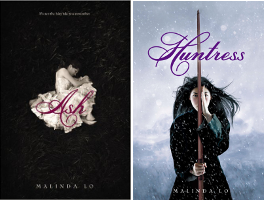 Genre: Fairy tales, YA lesbian romances, coming of age
Recommended for: EVERYONE (who fancies a fairy tale)

I could barely put either of these two books down. Both are set in the same world, through Ash takes place about a 100 or so years after Huntress, but read Ash first. Lo builds lush fairy tale worlds with magic and sidhe. And with young heroines who make their own choices and work together to save the day. Both books mix Chinese and Western fairy tales, creating a different type of story and different types of fantasy characters, depending on your biases. Plus, fall in love as there’s lovely lesbian romances in each.

I’ve been pushing this book all year along because, as a collection, Octavia’s Brood is amazing. It features authors of color and focuses on social justice sci-fi stories with visions of all kind of futures and current times. It honors the incredible Octavia Butler. Rarely do I read a short story collection where I really like 95% of the stories, so congratulations all around to both the authors and the editors. This labor of love shines.

Disclaimer: I backed this IndieGoGo, and I’m so glad I did because this book rocks. (Also, I never recommend anything I don’t truly like.)

7. Heart in a Box
by Kelly Thompson and Meredith McClaren

Genre: Comics about broken hearts, feelings, transcendence
Recommended for: EVERYONE (who’s ever had a broken heart)

I really do mean that everyone who’s ever had a broken heart should read this. The story follows a young woman named Emma, who recently had her heart broken and is going through depression brought on by it. When her roommate finally gets her out of bed and out for a night on the town, she meets a mysterious guy who promises to take her pain away. Literally. Heart in a Box is a wonderful turn on the tired scene of the guy who promises to make everything better.

Genre: Poetry, intersectional feminism, metaphors
Recommended for: EVERYONE (into poetry)

Rich’s poetry is just so…gah. More people should really read poetry. What I find interesting about anthology collections like this one — and I can wait to read the second one — is how you see the poet grow in their lives, subject matters, and strengths. Such an intimate look at the progression of an artist.

Genre: Memoirs, daddy issues, not a book with celebrity gossip
Recommended for: EVERYONE (with a sad childhood or maybe not because we don’t want to trigger you)

10. Redefining Realness: My Path to Womanhood, Identity, Love & So Much More
by Janet Mock

Genre: Memoirs, on being a woman, not a book with celebrity gossip
Recommended for: EVERYONE (who ever discovered themselves)

One of the main reasons to read books is to walk in someone else’s shoes, and Janet does an incredible job at sharing her heels. Redefining Realness is, at its heart, a novel about identity. While Janet’s identity labels and my own are in many aspects different, the part that stood out the most to me was Janet’s friendships and I found myself thinking a lot about those queer friends who got me through my teen years.

And bonus: 29 more books that I also loved this year.