The 2017 Goodreads clock-in is 119 books. I’m continuing on my quest to read more books from diverse authors and books on my shelves. Though I also needed comfort books, which also meant I finished up some series I’ve been enjoying or leaned on authors who I knew would deliver stories (or had a higher likelihood to do so).

I’d like to say for 2018, I’d like to read more prose. However, I also want to clean off my comics to-read pile, meaning those two goals are at odds with each other.

Here are the books I highly recommend and rated 5/5 stars:

Genre: crime, serial killer, thriller
Recommended for: those who enjoy the PNW rain, the twisty inside

Holy crap, this book was great. I’d wanted to read more of Cain’s writing since her Mockingbird comic, and this didn’t disappoint. The plot features a Portland-based FBI detective who hunts serial killers. The case he’s working on features dead high school girls. But you also find out that the last serial killer he tracked and how he was captured by her and continues to visit her in prison. It gets twisted in the best ways.

Monstress continues to be my favorite on-going comic book. I’ve recently thought a lot about how many comics I want to continue to read in the future, and if I could only subscribe to one comic book this would be the one. Both Liu and Takeda build extremely intricate worlds and compelling, complex characters. The book deals with the aftermaths of war, of extreme poverty, of orphans, of slavery, of gods, and of magic. 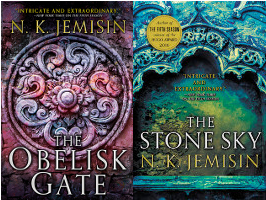 I couldn’t put this down. I couldn’t put the first book down, so I expected the same for the sequels. This series is amazing. It takes interesting concepts and kicks them around in different ways. And it’s cast is full of diverse, complex characters, who reflect a real world, and star as the main characters. Give Jemisin all the Hugos. No seriously. If you like sci-fi, fantasy, or authors who play with genres and make it look easy (which it is not and there is serious craft here), read these.

Genre: erotica, s/m, historical fiction, comics
Recommended for: those who want their romance comics with a little more

Genre: time travel, social issues through fiction, historical fiction, comics, race in America
Recommended for: teens and up (everyone)

Holy fucking shit. I didn’t put this book down and read all of it in one sitting. Unlike most people who reviewed this graphic novel on Goodreads, I will shamefully admit that I haven’t read the novel. (There’s a lot of Butler I still need to read.) The premise features a black woman from the 1970s mysteriously transported back to the pre-Civil War South.

Genre: historical nonfiction, comics, American civil rights, race in America, why you should always exercise your right to vote
Recommended for: everyone

Incredibly powerful. John Lewis is one of my heroes, so being able to hear his first person account about his life, about how he ended up as a civil rights leader, and his reflections on how our world has changed, were moving. The bulk of the trilogy focuses on the lunch counter sit-ins, the Freedom Rides, the March on Selma, and the other major touch points during the ‘60s US civil rights movement. It’s set in contrast to Obama’s inauguration, which is a pretty amazing contrast.

7. My Lesbian Experience with Loneliness
by Nagata Kabi

Genre: autobiographic manga, coming out stories, erotica
Recommended for: those who’ve struggled and come out the other side

Confession, this is the first manga I’ve ever read. (Or properly read.) Kabi’s story is about her life, about Japanese culture, and about her coming out process. This started as a web manga, and Kabi gained a large following before it was collected and published. The most infamous part is Kabi’s visit with a prostitute, but this book is certainly more than that. In fact, the part I most connected with was her depression and related employment struggles.

8. Just Above My Head
by James Baldwin

Genre: literary fiction, civil rights, 1960s, race in America
Recommended for: anyone who’s loved and been responsible for their siblings

Baldwin is an incredible writer. But wow, he’s hard to read. This book’s about Harlem, Civil Rights, and gospel music. The subjects are tough, but Baldwin flexes your brain in the way he technically constructs his narratives. Here his writing is circular, in that it all feeds all the themes all the time, and it’s mind blowing. Dense. I’d find myself re-reading parts and feeling like I’d gotten lost. Then it’d hit me and I needed to finish that part for the full circle. Also, I now understand the cultural raison d’etre of black gospel music.

9. We Were Eight Years in Power: An American Tragedy
by Ta-Nehisi Coates

While Coates’ essays can be found online, here they are collected and each with a brand new introduction. Since these essays were written over almost a decade, there’s certainly flaws Coates acknowledges in them as any writer will tell you about their work. I do think that more here than Between the World and Me, the neglect of acknowledging gender intersections in critical discussions about African American life stands out. However, these essays are a fantastic understanding of America and the history of how one of our original sins race-based slavery (the other sin being Native American genocide) is embedded in our culture and systems and why white supremacy destroys the fabric of our nation still to this day. And there is almost no one with a louder voice who I agree with more about his assessment of Trump’s rise.

Genre: supernatural Victorian steampunk, YA
Recommended for: those who think that finishing schools should be actual assassin and espionage training

This is the final book in the Finishing School series, which is set in the greater universe several of her series have been in. Sophronia excels at her “finishing.” (Yes, of course, Carriger finally played that pun. She wasn’t going to leave it there.) It nicely resolves some of the mysteries about characters and loose strings. All the fun I needed and expected. A lovely ending for a fine series.

23 bonus books that I also loved

Supergirl: Being Super by Mariko Tamaki and Joëlle Jones
Genre: superheroes, YA, comics
Recommended for: those looking for an update on teenage superhero stories
My full review

Cloudia and Rex by Ulises Farinas, Erick Freitas, and Daniel Irizarri
Genre: comics, YA, family, grief, gods
Recommended for: those who consider if you could put a god or two in an iPhone
My full review

Ladycastle by Delilah S. Dawson, Ashley A. Woods, and Becca Farrow
Genre: YA, medieval intersectional feminist jokes, knights and King Ladycastle
Recommended for: all the self-rescuing princesses who became knights
My full reviews

Eleanor & Park by Rainbow Rowell
Genre: YA, first love stories, behind front doors of a house, high school
Recommended for: those who remember one’s first love
My full review

Between the World and Me by Ta-Nehisi Coates
Genre: autobiography, letters from a father to a son, race in America
Recommended for: those who are looking to start a critical understanding of life for black men in America
My full review

Romancing the Inventor by Gail Carriger
Genre: steampunk Victorian supernatural, lesbian love stories, domestic fiction
Recommended for: Carriger fans who hope for a happily ever after for Genevieve Lefoux

Lazarus, Vol. 5: Cull by Greg Rucka and Michael Lark
Genre: dystopia, corporations are family, family above all, comics
Recommended for: those who want to know what our future may turn out like
My full reviews

Come as You Are: The Surprising New Science that Will Transform Your Sex Life by Emily Nagoski
Genre: nonfiction, sex education, body positivity, love your vulva
Recommended for: those wanting to learn the science behind sexual response, especially for ciswomen, and what happens in your brain

Giant Days Vol. 6 by John Allison and Max Sarin
Genre: college is a time, friendship, comics
Recommended for: anyone who can’t deny the power of friendships from college days
My full reviews

Trainwreck: The Women We Love to Hate, Mock, and Fear… and Why by Sady Doyle
Genre: nonfiction, smash the patriarchy, it’s Britney, bitch
Recommended for: those looking for a critical and intersectional discussion of how celebrity reflects directly back into regular life and every day misogyny

The Graveyard Book by Neil Gaiman and Dave McKean
Genre: ghosts, graveyard, serial killer, urban fantasy, YA
Recommended for: those who like Gaiman, but don’t love him and would like

Lady Killer Vol. 2 by Joëlle Jones
Genre: assassins, 1960s, gorgeous art, comics
Recommended for: those who read the first volume and want more (pick up the first one, it was on the list last year)
My full reviews

Kim & Kim Vol. 1 by Magdalene Visaggio and Eva Cabrera
Genre: queer lady space adventures, you fuck up in your 20s, comics
Recommended for: those who are messy 20-somethings or remember what being one was like
My full reviews

Finding Molly Volume 1: An Adventure in Catsitting by Justine Prado and Jenn St. Onge
Genre: cat cuddles, artists, coming of age, comics
Recommended for: those who like cookies and milk (type your choice)
My full reviews