The Lovely Bones by Alice Sebold
Rating: 2/5 stars
#52Challenge prompt: a book with a “y” somewhere in the title 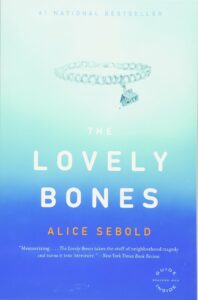 This freaking book — I waffled on what to rate it and I ended up rating it the lowest of my zillion Goodreads friends who’ve also read it. Because I tend to read comic books that are badly marketed, distributed, and have like no reviews, when I do read a “popular” book, it can be an odd experience. Like will someone call me out for not liking it? Not that Goodreads is call out culture…yet…maybe if they fixed their interface and put it on faster Amazon servers.

The Lovely Bones is set in the late 1970s and about Susie Salmon, a girl who’s murdered by her neighbor and serial killer. The rape and murder are at the beginning of the book, and the rest of the book follows Susie’s family as she watches them and tries to influence and understand them from heaven. The book itself is very much about grief, how everyone experiences it differently, and how Susie herself grieves her lost familial and friend connections.

In general, Sebold’s writing’s very engaging, and she’s great with those authorial flourishes to keep you engaged at chapter’s end. In fact, it was easier to set The Lovely Bones down mid-chapter, and I found myself setting it down because the book became too much. Anyone who’s lost a loved one and gone through the grieving process knows everyone grieves differently and the same.

Susie’s rape and murder seemed excessive from the get-go. Reading about Sebold’s life and her own experiences, I can see how this book was no doubt working through her own trauma, and I can respect that. Sebold certainly didn’t do this to exploit this type of horror or fetishize it. No one considers Susie less of a person because of what happened to her, and the rape and murder scenes are horrific and brutal.

Narratively, it became clear early on that they were not going to find Susie’s body, and that her killer would never be brought to an earthly justice as we know it. What happens as Susie watches her family, her killer, her friends, and her first boyfriend is that they all become fully realized people in ways she didn’t know or understand when she was alive. Susie spends lots of time observing — for instance — her mother Abigail. In her relationship with her mother, Abigail was her mom. But Susie realizes how much of herself her mother has pushed to the side to be a stay-at-home mom, and how Abigail’s neglected personhood stands starkly there as her motherhood’s dealt a major blow by Susie’s death. Susie talks about a candid photograph of Abigail she took (when alive) where Abigail just looks like a beautiful woman.

Her father Jack, on the other hand, retreats into the comfort of being a parent, and insisting on being a parent to all three children, even the one who is dead. He grieves the longest through the book. In some ways, Jack carries Susie’s ghost even when she’s not watching them.

The family predictably breaks apart at the stress of a murdered child. Abigail runs away, Jack drifts into himself, grandma comes to live with them, Buckley the brother who was a toddler sees Susie, and Lindsey the younger sister becomes not one daughter, but two daughters. Susie’s friend Ruth becomes essentially a medium — seeking out the dead and spirits — and Ray, her first and only boyfriend, becomes best friends with Ruth and a doctor in search of another kind of truth.

Sebold plays with time in the novel. Right around Susie’s death, time moves very slowly. You feel the family sitting together, waiting for news from the police. You see Abigail forgetting to pick up Lindsey, or them needing to take the dog for a walk. There are tense moments when Jack realizes Mr. Harvey, the neighbor, is the killer, and when Lindsey breaks into Mr. Harvey’s house looking for evidence and then barely escapes his notice. Sebold would write a good thriller.

But then time speeds up. It speeds up as Susie’s death becomes not healed, but further in the past. Everything comes to a head when Jack has a heart attack and the family is faced with the possibility of death of another member. It’s been ~10 years since Susie’s death, and Lindsey has graduated from high school. The family comes back together, not just for Jack, but to say goodbye to Susie.

As she prepares for the next phase of heaven, Susie has touching scenes with all her family members. And then it’s time to say goodbye to Ray and Ruth, who are now young adults. This scene is controversial and very problematic. In it, Susie possesses Ruth’s body and has sex with Ray, who knows it’s Susie inside of Ruth. Ruth is temporarily in heaven, but is busy getting to know the dead instead of watching her body like Susie watches everyone on Earth. There is a complete lack of consent with Susie using Ruth’s body in this way. Sebold never mentions consent around sex.

Ruth is a lesbian, and while she’s kissed Ray before when they were teens, those scenes made it clear she’s not into Ray for multiple reasons. Sebold also doesn’t show them using condoms, and Ray and Susie in Ruth’s body have sex multiple times. All I could think about is how violated Ruth would feel, and if the poor woman would end up pregnant. Lack of consent is gross. As a character, Ruth feels like a prop for Susie and that this was her only purpose in the book.

I already had issues with the graphic details in the opening, but the closing left a bigger sour taste in my mouth. I definitely do not want to see the film version as I’m sure it will only further glorify the Ray and Susie/Ruth sex scene as supernaturally romantic.

Sorry, friends, I cannot get behind this bestseller.