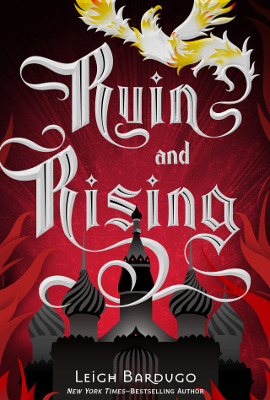 Last books in a series that leave me with a strong emotional impact always tend to get higher ratings. I’m not sure if Ruin and Rising is a 5-star read, but it absorbed me. I read The Color of Money, then The Hate U Give, and then this, and I joked with my boss that this was my light reading.

You know, a light reading about a young woman Alina who must choose between killing the love of her life OR saving her entire country, and likely the world. But at least, it was extremely fictional.

One thing that always bothered me in this trilogy was how fast the characters moved through their country and beyond its borders. Yes, they’ve invented airships, and those and their boats can go faster thanks to magical powers. However, they also travel incredibly swiftly when they are on foot. This book crossed the entirely of Ravka several times. And I understand that Bardugo needed to push the narrative and plot onward, but tiny bits of skepticism from me.

This is essentially the book where Alina finally must make choices. There are no flimsy dalliances between boys, or if she will kill, or if she will lead. Alina had little wiggle room and had to make decisions. Bardugo did try to insert some Nikolai or Mal tension, but it was flabby.

The first pivotal scene — where Alina stood up to the Apparat and won — was perhaps the scene I’d been waiting for over three books. Not because the Apparat just seemed to be a weasel seeking power. But because Alina hadn’t led in the same way before. That was what she needed in order to gather her people and gather her will — and her Grisha powers.

As Nikolai always seemed to have a solution for Alina, it was another needed moment for Alina to witness Nikolai ravaged. Both him physically and his resources and people. Baghra’s sacrifice also sealed our villain, the Darkling. The horror sealed Alina’s place as the hero, and his as the villain, even if he always was one.

I appreciated how Bardugo explored the Darkling’s past and his connection to Morozova without trying for his redemption. Sometimes we require books to show us we must oppose monsters at all costs — especially those who seek power above all — and show how power corrupts completely. Which after Alina escaped the Darkling’s clutches and he vowed to use her as a weapon (and possible concubine), there was nothing he desired except for power. If he had wanted to clean up the Unsea, he knew the solution. His death would’ve been unnecessary, but his magic made imprisonment for life not an option.

I have mixed feelings about Mal being the last amplifier. It doesn’t make a lot of sense that Mal wouldn’t have lit Alina up when they were younger. It does add to when she first discovered her powers to protect him in the Unsea. And it was good they didn’t have to chase the firebird, though they did travel very far, find it, almost die in its fire, and get trailed by transformed Nikolai. (I just kept seeing him as a flying monkey from The Wizard of Oz.)

I do love the different things Bardugo has Alina and the other do with their powers for their final showdown with the Darkling and his army in the Unsea. The use of Alina’s light to camouflage the entire crew was pretty great. Nice science-y things in an otherwise magical book. I suppose it is the small science.

In the end, it was the people getting Alina’s gift of power, which saved their country. Now this is actual populism in action. True democracy. Alina made a sacrifice of her heart (Mal) and his life in order to save her people, and likely all the rest of the world. As the poet Springsteen says, “a king ain’t satisfied until he rules everything.” Alina gave up her power and Mal his.

Since this is a land of magic, it’s not shocking that Mal was revived. And not to disappoint us, Bardugo got all of our characters together. (Yay for Tamar and Nadia!) There were happy endings for the team. Even if war and PTSD are real damage.

Of course, Alina and Mal opened an orphanage, and of course, they, in secret, see their friends once a year, even if they both lack powers post-book. I was not disappointed with the lack of an elaborate ending, even if the change in writing style was a little jarring. At least, Zoya and Genya show up in other books.