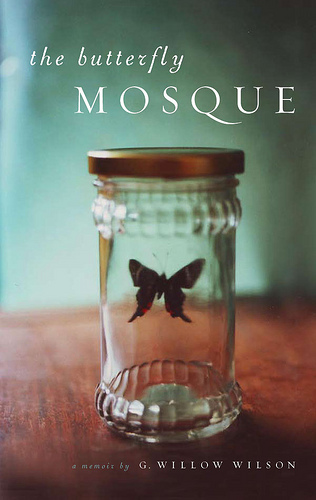 I fell in love with G. Willow Wilson’s The Butterfly Mosque hard. Which seems like an odd thing to say about a memior, particularly one by someone still alive and who’s only a year older than myself. (Also we live in the same awesome city of Seattle.) Wilson’s memoir is about her conversion to Islam, about her marriage to an Egyptian man, and about forging her own identity as an American Muslim learning to live in Egypt and the Middle East in a post-9/11 world.

While Wilson and I live very different lives, I was drawn in by both the beauty and truth in The Butterfly Mosque and the telling of a story about building an identity that is different from the various ones prescribed by society — whether American, Muslim, or Egyptian, in this case — and standing up for what works for her. I highly relate to taking the path that works best for oneself instead of the easy road. And Wilson certainly does not take the easy path.

One thing that stood out in The Butterfly Mosque was Wilson’s warmth to her world and the people around her. This is a story about the creation and evolution of love and of family, as much as a story about her faith. Something I greatly admire about Wilson is that she never once justifies her faith. Yes, she explains why Islam attracted her and talks about her steps toward it; but she’s confident in her own ways and thus, doesn’t hamper her memoir with “why my faith is so awesome” which many other religion-centered memoirs do. I almost wanted to say this book is without religion, but that’s entirely wrong. It’s full of religion. But religion in a mature, confident manner. Religious in a way that Wilson presents her love for God and just wants to share it with us. There is no “you will feel this too, if you convert.” Wilson even goes as far to talk about other Western Islamic converts she’s met, and how she feels very different from them, even the ones that she shares commonalities with.

Family is again and again a central theme to The Butterfly Mosque. I believe Wilson takes extreme care to only talk about her family’s love, and often of her in-laws, which makes sense given she’s halfway around the world from her parents. This would be quite a different book if her family also lived in Cairo. Though I did at times, especially at the beginning as she rightfully worries about her family’s reaction to her conversion, wonder what she was leaving out to protect her family. I do love how Wilson frames the times with her in-laws and the caring that comes from them. Her Uncle Ahmed is certainly someone we’d all love to have in our family.

Wilson’s relationship with her husband Omar, while certainly significant in her own life, was perhaps my least favorite part of the book. In many ways, their love seems very ordinary. While not a bad thing in terms of their own relationship, her time with Omar wasn’t what drove me to keep reading. Perhaps the ordinariness with a splash of the occasional clash of civilizations is indeed the point. Wilson and her husband, at the end of the day, are normal, which is what a lot of The Butterfly Mosque wants us to know about Islam, about Egypt, and about the peoples of the Middle East. About the normality and about humanity regardless of faith or ethnicity.

The parts I enjoyed most were Wilson’s love of Cairo and the Middle East. About her struggles as she goes from living in a nicer place as an English teacher to living a lower middle class area and working as a journalist. I loved the details of what it’s actually like to live in Egypt. How to shop. How people connect in the community. About Wilson and her roommate Jo and how they had to help their cat give birth. Or how they suffered through parasites from bad food, which been there. I loved Wilson’s dedication to live in Egypt for one year and how she adjusts to the chaos and is kind of accepted into the community she lives in, but still struggles are an outsider.

I loved the parts where she travels to Iran, the country of sorrows, and tries to find joy there. And how she writes about the mountains there reminding her of those she grew up with back in Colorado. I also adored her adventure to the oasis of Siwa in the Sahara. Her descriptions are poetic and beautiful.

The palms made dry whispering sounds as they moved overhead and beyond the oasis the sand rose up yellow-white in the sun. When we went back to Siwa proper there would be an e-mail from the State Department waiting in my inbox, asking very politely whether I was registered at the local embassy (I was), but for now I was happy without reservation — the happiest, I think, that I have ever been. I knew then what Heaven must look like: a garden in a desert, all unapologetic and sudden green, where there were friends to talk to and springs to bathe in. You couldn’t think about war there, or injustice, or sacrifice, only wonderful simple things. It was un-Babel — everyone present spoke at least three languages, but for a few reverent minutes we didn’t need to use a single one of them.

Wilson also presents herself as the type of journalist I’ve always admired. The one who asks the hard questions and publishes what happens around her. And is always aware of how people are responding to her pieces. The story about her article about the all-woman’s train car and the reactions was brilliant in the contrast between East and West cultures.

However, I did see that story as a turning point in The Butterfly Mosque. Wilson becomes acutely aware, perhaps to a fault, that Islam is not being portrayed positively or even correctly in the Western media and those back in the United States are believing those mis-truths. While I’m completely on her side about correcting horrid inaccuracies and how frustrating constantly being confronted with these in Western media is — not to mention how she was put on a terrorist watch list –, this does change the tone of her book in those last few chapters. It does make me wonder if she’s planning on writing an afterward for future publications now that she’s lived in the United States for a while again, not to mention the current political revolution in Egypt, or if she will someday pen a sequel.