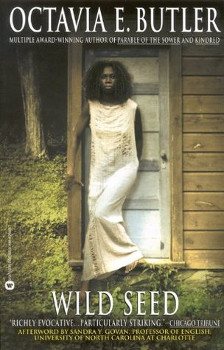 This wasn’t what I expected. Of course, I can say that of most any Butler book I’ve read so far. Wild Seed is both the first and the last book in her Patternist series. It’s chronologically first in the universe and set between the 1600s and the 1800s, and it’s chronologically in Bulter’s real world publishing, the final book she wrote for it.

Having read a couple of Butler’s later and more famous books, it’s interesting to see how she evolves as a writer. She plays with themes around freedom, slavery, genocide, genetic manipulation, and gender, but they don’t stand as deep meditations on them like the later books. I appreciate being able to see how Bulter grew as a writer.

The biggest theme here is freedom and slavery. While Wild Seed is set against the backdrop of the very real African slave trade — both on the African continent and then in pre-Civil War America — Anyanwu seeks freedom from Doro, who becomes both her master/husband and her only companion.

Doro is a “spirit” who moves from body-to-body as needed, and he’s been alive much longer than he recall. He cannot die as he will jump into the nearest alive body, even if they are miles away. Anyanwu is a shape-changer, great healer, and has been alive for over 300 years at the novel’s start. She’s had many children and has learned to use her powers to survive. Anyanwu has never met another with supernatural powers until Doro.

Of course, Anyanwu doesn’t realize that Doro collects supernatural folks and breeds them with each other in order to produce powers. He has colonies in many places and a skill of “finding” those with powers. Anyanwu gives up her freedom to go with Doro, as his wife, to America, and in exchange, he’s promised not to kill her progeny. (We quickly find out this is one of Doro’s first lies.)

Wild Seed alternates points-of-view between Anyanwu and Doro. For the bulk of the book, Anyanwu functions as our protagonist and Doro as the antagonist. You cheer for Anyanwu to find happiness and get away from this nasty man. (We find out early on that Doro cannot detect Anyanwu when she’s in animal form. Though Anyanwu doesn’t realize it until much later.)

Both Anyanwu and Doro are black; however, Doro’s body stealing ability means there are times he’s a white man and his deliberate choices to (mostly) remain male. Both of them consider slavery an equal opportunity one born, no doubt, of them being older than American’s race-base slavery, and Anyanwu’s view has always been her ability to outlive her capture. Doro is not someone she can outlive. He also manipulates Anyanwu by finding bodies of the types of men she finds attractive (black men with features like her original people).

Doro does terrible things to the people under his collection. They are breeding slaves, more than physical slaves, and Doro’s affections are based on abilities, sanity, and obedience to him. It takes generations for him to see value in Anyanwu beyond breeding. In fact, Doro’s favorite son Isaac, who is married to Anyanwu, is one of the main reasons Doro does not simply kill Anyanwu because she fights for her freedom. Doro must change enough to see Anyanwu beyond someone who he will kill when she’s no longer useful to him.

Which is interesting given how Doro’s breeding programs are all about finding others like him. He doesn’t want to be alone in this world. And neither does Anyanwu.

I kept considering why I gave this book four instead of five stars. I liked it a lot, and at points, was grabbed by the narrative. But I found myself lost in Doro’s narrations. Butler writes a disagreeable fellow and presents his reasons, right or wrong, before us. Perhaps Doro’s trap for Anyanwu felt inescapable, perhaps it is the lack of solutions Butler’s presents, that felt off. Maybe I wanted Doro to get his punishment by the end.

I will continue reading this series, and I am curious to learn if Doro or Anyanwu grace the other books.