Lost Girl is an urban fantasy detective show about a succubus Bo and her human sidekick and best friend Kenzie. Together, they solve supernatural mysteries and crimes. And sometimes they call in the help of two police detectives, Dyson a werewolf and Hale a siren; a human doctor Lauren who studies and works for the fae; and Trick, a very old and powerful fae who owns a bar that looks like it would fit in a Tolkien novel. The show aired its first season in Canada, which is why you probably haven’t heard of it. But SyFy picked it up and is supposed to start airing season one and the new season soon.

To me, Lost Girl is the show someone wrote for me. I love it. You should watch it, and then come back to read this review when you’ve watch the first episode of season two.

Oh, yeah, first episode opens with some Ghostbusters action. Though bad lighting. Really bad lightening. I love this whole thing where Dyson is AWOL and Hale’s being part of the gang. Yay for more Hale. And yay for more Kenzie and Hale fun.

Lauren! You’re so awesome. Lauren can hear your Bat signal from afar, Bo. Take advantage of it now. Before the Ash comes out of his coma.

Okay, I’m really loving these new crack teams. The Ash can just stay in his coma.

Not so keen on the flaying and skin eaters. I saw that episode of Buffy where Willow gets trapped by one.

Speaking of Whedon shows “how much can he change in just three weeks” to Dyson in cuffs is just like a Whedon scene-to-scene transition. And then to the circus. Someone was watching their Buffy over the summer. This is episode was quip-tastic.

I’d be completely okay with not seeing this dude puke up hands or whatever. Gross. Nasty performance art.

Bo is really not very good with this whole confronting a bunch of people who are the guilty ones. Way outnumbered and out fae’d. And they led them to the “bad one” a little too quickly. Oooh, creepy children. When Kenzie gets the wiggins, it’s serious wiggins.

I take it that the drunk guy is the fill-in for the Ash?

Dyson, alone with his hog and clutching his manboob. Dyson completely deserved that right hook and getting accused of hanging out in douchetown.

The old candy factory. There’s the candle one and the glass one. There’s a lot of old factories in this town. Everyone just gave you the brush off, Bo.

So that Hale and Dyson could go investigate by themselves. Because that’s smart.

Huh, tattoos on the inside of someone’s skin. That’s interesting, and a good place to hide treasure maps. Or at least that’s my prediction. Of course, Trick will know exactly who that is. I adore Kenzie patting Trick on the back for stealing books from the Ash. She’s so adorable. Way more adorable than klutzy girls in romantic comedies.

The circus seems to have found Trick and company. Poor books!

Dyson is probably overly identifying with these Damned right now. In that he feels dammed without the love of Bo.

What did I say? Treasure.

Bo taking care of Lauren is so awesome. I love that they can cook now. Unlike last season. Poor sleepy Lauren.

Kenzie saving the rat is awesome. I’m the same way.

Bo and Kenzie’s friendship and eye looks and knowing what the other is thinking is awesome. <3 female friendship.

"Define consummated" — Kenzie, exactly my thought. That and Hale and Kenzie's jokes. 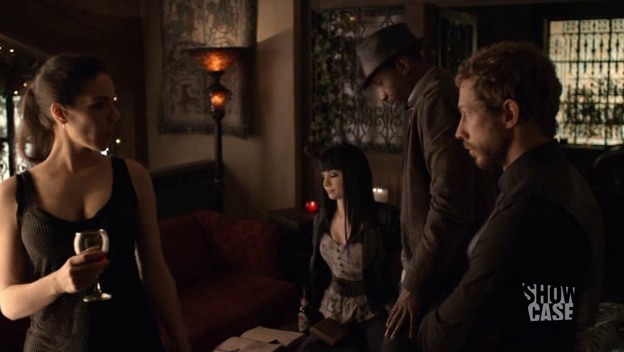 I’m not sure if this whole marrying the land thing is silly or awesome. Jason’s currently really annoyed that they haven’t named the ‘city.’ It’s Toronto, duh, because that’s where this is filmed. Though maybe they don’t have to name it so it doesn’t get stuck on Canadian TV and can translate to America. You know, because we Americans would never watch something from Canada, like hockey or Little Mosque on the Prairie.*

Oh, bro talk. I love how Hale doesn’t think that the fae curses are real. I love his tale’s “end with a kiss” theory. It’s so cute. But way more interesting if Dyson doesn’t get his passion on. (Sorry, Lauren/Bo shipper.)

“Team Badass” can have many different incarnations, Bo.

Did you not think the place would be booby-trapped, Team Badass? Or that the carnival freaks beat you. Congratulations, you’re bugged. Or you have a mole.

The Land is awakening into a hot woman. Good thing she’s young and pretty.

Oh “sexy pagan underground party.” Hey, this looks like the bar that they go to all the time. “Do I have to cuff your muff?” Nice, Kenzie.

Creepy Puritan/Wednesday Adams girl is back. Making Bo and Dyson get it on apparently. Well, I suppose if you’re not going to feel any passion ever, this would be at the party to test that curse at, Dyson.

Can the Land not stand on her own or is this some kind of rape. This is so creepy and not very awesome. Rat guy is dead.

Bo’s all claiming the city. Or at least the entire crowd.

I’m so glad that they’re not dragging out this whole Norn thing and Dyson not telling anyone. I still don’t get how the Norn could make it so Dyson didn’t feel anything in the future. I can understand why she could take the past emotion, but the future stuff is just odd. Yeah, I know supernatural show.

Oh, creepy little girl is an omen of something that wants to kill Bo. Her father?