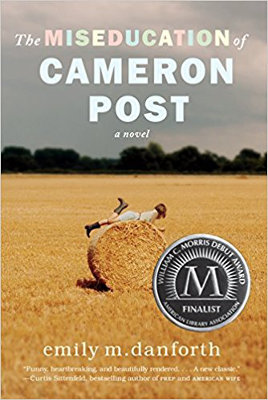 The Miseducation of Cameron Post by Emily M. Danforth
Rating: 5/5 stars
#52Challenge prompt: a book that has been made into a movie

I have to stop reading books that remind me too much of my childhood. This story centered around Cameron, a tween/teenager growing up queer in rural Montana in the late 80s/early 90s. Cameron is about seven or eight years older than me and my rural hometown was more populous, but wow, the little cultural connections and relations I made while reading this were numerous.

The Miseducation of Cameron Post starts off slowly. I had a hard time getting immediately swept into the narrative, perhaps because it did remind me of small town Oregon. Where you spend your days outside with the girl you have a crush on. However, unlike Cameron, my crushes (except one) never panned out to be actual queer girls.

If there’s anything about this book, I have a little bone to pick with, it’s that SPOILERS every girl Cameron kisses does kiss her back. When she’s an older teenager, sure. I absolutely believe the few queer kids in Miles City, Montana would seek each other out for kinship and safety. Shortly after I came out, my mom asked me if all my friends [in high school] were gay. Turns out, yes, almost all of them were — even if not all of them were out then, even in our friend group — and we need friends who wouldn’t judge us due to being queer, which wasn’t our parents.

But I’m pretty sure the girls I had crushes on when I was 12 were straight. Or at least, to my knowledge, they never dated women and are now married with kids. Even if we did may some version of flirting in barns with our sheep, chickens, and rabbits.

Anyway, back to the book, I appreciated that Cameron quickly figured out she liked girls. Yes, she briefly dated one of her male friends to see and to be her publicly acceptable date to prom — poor guy liked her a lot — but Danforth doesn’t turn the book into a ‘is she or isn’t she.’

And despite everything that happens due to her queerness — Cameron being outed while in high school by Coley Taylor, the girl she loves, and being sent to a gay conversion boarding school — Cameron’s original wound isn’t around her queerness. It’s her parents’ tragic and untimely deaths due to a car accident. Yes, for a short time, Cameron does believe her queerness caused it, or that God was punishing her parents for her sins, but it’s actually releasing some of her grief and pain that guided Cameron forward.

Coley played a dangerous game. I’ve been infatuated with Coleys (as a teen), and one who I’m pretty sure wanted to at least sample gayness, but there was no way I was playing. Else I too would’ve ended up in that conversion camp.

Danforth’s exploration of Cameron’s sexuality and her teenage sex life felt incredibly real to life. Particularly her obsession with watching movies and trying to figure out how lesbians have sex. Lindsey, who played Cameron’s guide and glimpse into what queer life looked like in the big city, but also how actual lesbian people function, was great on the movie commentary. Movies by straight people often don’t understand how two women actually have sex.

I did think Danforth went easy on gay conversion therapy. Yes, the emotional and spiritual well-being of Cameron was damaged by being told to hate herself and wrap herself in shame every day. Yes, Danforth has one of the kids attempt suicide, and perhaps have, in the process, permanently disfigured himself. Yes, these kids were often fed junk food, and like many religious schools, there were little-to-no education standards. But in many ways, at least Rick was shown as being misguided but genuinely wanting to make life better for these kids. Not to mention, some real life gay conversion therapies physically tortured people, so while this book went darker with Mark’s attempted suicide, it didn’t go all the way.

I particularly enjoyed the additions of Jane and Adam. Not only did they bring more diversity to this book — let’s face it, Montana is super white — but they also held their own stories that were different than Cameron’s. Both of them worthy of novels of their own. And while I know the book’s resolution focused on Cameron — it is written first person, after all — I wanted to know their resolutions. What did Jane need? What about Adam?

I also wanted to hear and see from Cameron’s Aunt Ruth and her grandmother. Would their opinions on her queerness change due to their own situations? Or because of Mark’s attempt? Does Aunt Ruth survive cancer?

For relationships to change from people who’ve rejected their relatives’ queerness, it takes time. (Or it never comes.) And perhaps that’s what Danforth didn’t have here. We don’t get to know grow up Cameron, or even runaway Cameron. There are many threads left undone for the sake of an already thick novel. As beautiful as Cameron’s resolve to alter her grief and heal her wounds was, the ending left me feeling a bit unresolved in this world.