When I was growing up, I always said that I was going to move away to a big city and never look back. Which is just what I did in my move to Seattle. (Okay, you can argue that Seattle isn’t that big, but it is the big city in the Pacific Northwest.)

Here’s a view from my balcony: 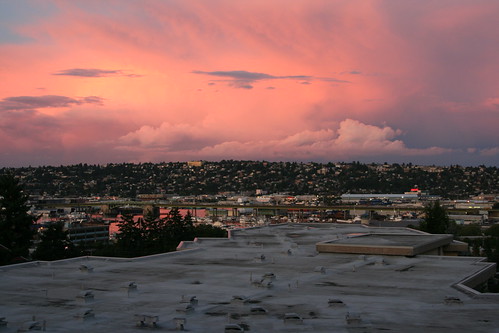 I had some time to think when I was at my mom’s wedding of just why I couldn’t/wouldn’t move back to my hometown Bend, Oregon. Especially when my mom and fake!daddy offered to kick both my brothers out of their home and let me and Jason move in.

But I think I’ll stick with Seattle.

Reasons why I love Seattle

1. Nightlife — Okay, I’m completely bias considering that I met Jason out and about. But seriously, Seattle has a pretty hopping nightlife from moving-and-shaking in Capital Hill and drunk U students in the University District to a little class in Belltown and that hometown feel in Ballad. Any night of the week, you can go to a concert. Those with more exotic tastes can probably find a subculture to serve something up. But seriously, who doesn’t want to kick it up at Hot Flashes, the ’70s/’80s dance party for 36+ lesbians and those who love them? Or eat a warm Italian wine custard or a 12-egg omelet at 2 a.m.?

2. Neighborhoods — As a prosumer, everything is customizable and that includes your neighborhood. This is especially true in Seattle. Neighborhoods work like a town within a city. They keep your community and they keep your grocery store within walking distance if you’re lucky. I live in Magnolia and I don’t really “fit” there, despite loving my apartment. I liked West Seattle better and all my friends think I should move to Capital Hill. I was having a conversation with my Portlander cousin about why I think Seattle is better than Portland and she said Seattle felt cold and not like a city. Then she told me she’d been staying in Northgate or almost the suburbs as I refer to it. Jason laments letting go of his bachelor’s pad in the U-District, only to remember the frat houses and how hard it was find parking on a Friday night. My friend Gretchen doesn’t think a single woman and cat fit into Ballad and dreams of a condo in Leschi. While my friend Steve swears by Beacon Hill in his post-grad school and paying back student loans years.Another friend of mine is afraid of the South End of Seattle and when inquiring why I don’t show the same worry, I remind her that I lived in Tacoma for five-years before moving to Seattle. Someone is going to make a lot of money is s/he writes a programming code to match you up with a neighborhood based on your personality. Red and blue states divided up on a micro-level.

3. Opportunity — This was the big reason I decided not to move back home after college. Seattle is one of the United State’s most educated cities, and it shows in just how much industry we have up here. Okay, the housing prices completely suck for those without degrees and even for those who do. However, we still need people to make coffee at Starbucks or take tickets at the Space Needle. I work in the tech industry (bias) and Microsoft is only one ridiculous commute away. Not to mention Google, HP, Starbucks, Real Video, Eddie Bauer, R.E.I., etc.

4. Urban Shopping, Farmer’s Markets, and the Great Outdoors — I’m an indoor kitten. I love being able to find what I need inside the city and knowing all those little niche places to find them. I like being on a first name basis with the guy at the comic store. I also love Seattle’s farmers markets. There’s one in every part of the city, plus Pike Place Market, which is open 7 days a week. Support local farmers and eating fresh food is a win-win in my book. I also add the Great Outdoors because it might not be my style, but Jason can testify about the great rock climbing, hiking, kayaking, and other outdoor sports located both in and just outside Seattle. You can swim in Green Lake with assurance that I know a lifeguard.

5. Tourism — Tourist bring money into the city and also create jobs. They also help keep landmarks like the EMP from going the way of the dodo. Plus, tourism guarantees that there’s stuff to do during the day and stuff to do when your relatives come to visit. This is very important since not all of them, like my mom, are okay playing Solitaire and watching Veronica Mars all weekend. (Okay, we were both very ill with the flu that visit.) And tourists go home after they visit, leaving the housing for us Seattlites to fight over.

Reasons why I dream about moving away from Seattle

1. Traffic — Ask anyone about traffic and you’ll get an earful. (On the plus side, it makes a great conversation starter at parties.) Want to leave the office early to beat the traffic on Friday, you’ll be leaving at about 2 p.m. I’ve moved cities just to shorten my commute. Even my Boston-living-and-commuting friend Mally flinched at the traffic. My personal commute from home to work takes me 25 minutes on a good day and over an hour on a very bad one. It’s smart to learn the back roads and how the connect through the city without using the major interstate. Or acquire yourself a friend who used to be a taxi driver to suggest routes to you. (Thanks, Eric! I go that way to and from work.) Or convince co-workers to carpool with you. Jason swears by his bicycle, even it’s sometimes scary, for his commute; his bike is faster than both his car and the city bus.

2. Rain or the Cloud Cover — Seattle is rather infamous for its rain. It’s actually a very temperate climate and gets less rain than Portland. The rainfall is attributed to keeping Seattle cleaner for a city of its size and lush and green. However, there is gloomy cloud cover most all Fall/Winter/Early Spring. The cloud cover is depressing and gloomy. I miss sunshine and rainbows. Seattle needs more rainbows.

3. Northgate, Tukwila, and the ‘burbs — Seattle is surround by ‘burbs. Which are usually the products of two things: 1) people not wanting to expose their children to the scary city and 2) poverty, also known as people who can’t afford Seattle. The ‘burbs make the commute worse as in order to make money, everyone wants to work in Seattle. I also think ‘burbs are a soulless eyesore of sprawl. I work in Tukwila, and it’s super depressing. (Where the poor people live for those not paying attention.) There are box stores, dads driving mini-vans, and those neighborhood you can’t navigate because all the houses look identical. Once in a while, I brave them to visit my Uncle Tom in Lake Stevens, but he doesn’t understand my fear. He doesn’t understand the look of terror in my eye when I can’t find his house, get dragged to middle school volleyball games in the mini-van, and watch him incrementally move his giant TV for best viewing. Sorry, Uncle Tom, but after Seattle going north, there’s only Canada.

4. Everyone has a B.A. in English, just like you — There might be opportunity, but Seattle is full of overly qualified people. Or someone just a hair more qualified than you and you’re probably only three degrees of separation away from them. My former co-workers and I used to compare which jobs we’d all applied for and interviewed for. One now works at a job I turned down.

5. Tourism — Yes, they were on the plus side too. On the bad side, they block the streets downtown on the weekend. They don’t know where they’re going. They leave garbage behind. They complain about the rain and the traffic and don’t live here. Plus, it gives your relatives extra incentive to visit you.

0 Replies to “Seattle: Not Just the Big Unfriendly City”