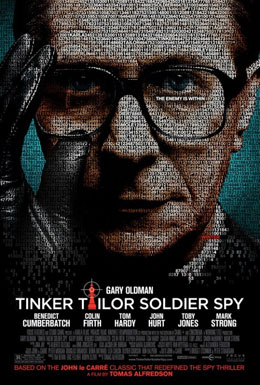 When Tinker, Tailor, Soldier, Spy started, I assumed the film was going to be a bit of nostalgia about the Cold War. About a time when men where men; about the way things used to be; about how the Cold War was such a clearer time when we could name our enemy, unlike this War on Terror; and something in the vein of remember the glory days for straight, white old men. There were plenty of old white men in this film about the highest ranks of the British Secret Intelligence Services, about the bosses of spies. As their deeply wrinkled faces filled the screen, I couldn’t help but to wonder if we’d ever see older women with deep-set wrinkles obsessed with their jobs lining the screen. (Yes, I know about Iron Lady, but I want an entire cast filled with women with wrinkles and whatever is our equivalent of balding.)

Much to my pleasant surprise, Tinker, Tailor, Soldier, Spy does not glorify the Cold War. Perhaps due this being a British film, it instead is as much a critique on the ridiculousness of the Cold War spy as it is a critique on masculinity, specifically the notion of what it is to be a spy. With the exceptions of Peter and Ricky, these men are old. They were once war heroes. For the most part, they send out others to do the dirty work and play chess with Moscow, with Karla, their Soviet equivalent. END_OF_DOCUMENT_TOKEN_TO_BE_REPLACED

In Who Took the Bomp? Le Tigre On Tour!, Kathleen Hanna talks about how Le Tigre’s electroclash music, choreography, and style was vulnerable. And it was dorky, fun, and passionate. And very, very political. They were an unapologetic feminist queer band composed of women musicians, and the film smartly weaves this into the narrative. There are rants and celebration — but no preaching or rockstar crazy — and lots of good music and spirit.

Watching the film made me miss the band terrible. (Le Tigre broke up in 2005.) And it also made me realize just how personal and inspiring their music is to me as a queer feminist. But it was especially inspiring when I was younger.

Le Tigre’s songs explore the personal being political, the suppression of feminist herstories, about being a lady band and female artists, about the harsh realities of the world, about sexism and homophobia and hate. But at the same time, to me, their message was always hopefully. Their message was always: you are not alone; we hear you.

All three members — Hanna, Johanna Fateman, and JD Samson — talk in different ways about how they pushed the envelope and did something that mattered to so many people. Whether it was feminism, gender performance, or just the simple act of being three women in a band, Le Tigre’s legacy lives on. They were a radical act.

As a documentary and a band movie, Who Took the Bomp? Le Tigre On Tour! was insightful, heartwarming, and entertaining. The live performances were mixed in well with the interviews, both while on their final tour and post-Le Tigre. I highly recommend this film to any Le Tigre fan or anyone interested in feminist music.

If nothing else, the scene where Fateman (on a dare from the others) gets her picture taken with Slipknot is worth watching the entire film.

And if you’ve never heard their music listen: END_OF_DOCUMENT_TOKEN_TO_BE_REPLACED

Inspired by my friend Kyle’s list and everyone else’s, these are my Top 20 Movies of the Decade. Every movie on this list was made between 2000-2009. Looking at my list, I definitely stopped watching new movies during my college years and pre-having a car. You won’t find any horror movies on the list as I’m easily scared. I like road-trips (6 movies), superheros/epic fantasy (8 movies), strong women leading/co-leading roles (15 movies), and LGBT characters (7 movies).