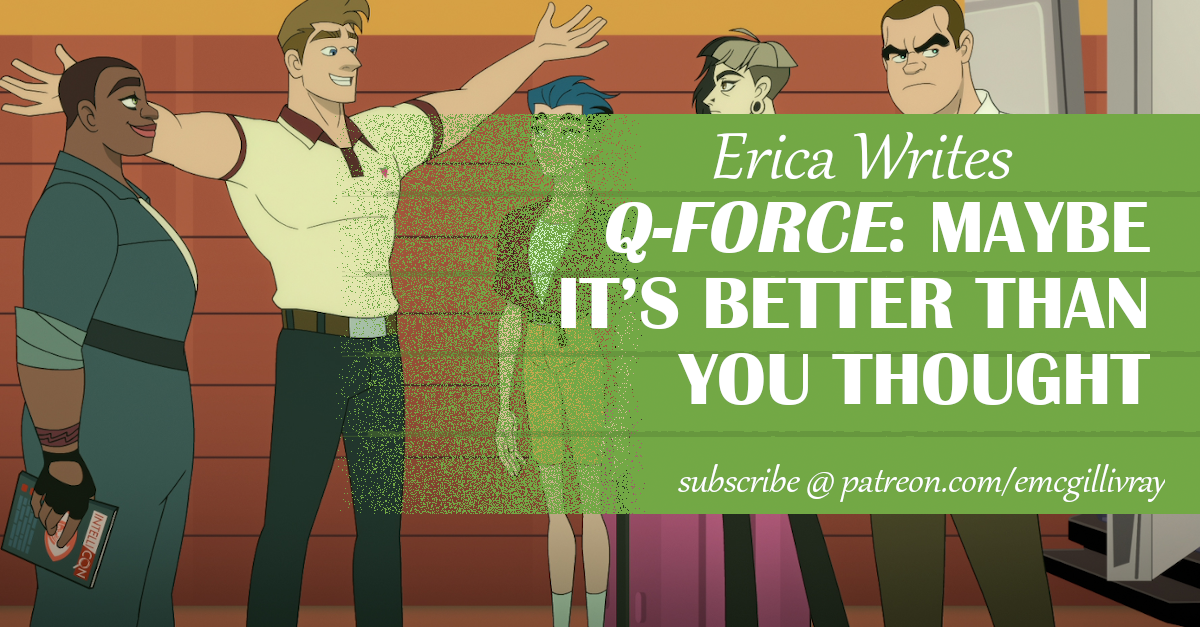 When the trailers for Q-Force dropped during Pride Month, very online queers came out with their pitchforks. The jokes were dated. There was too much sex. Was every single member of the alphabet mafia covered? All centered on a 30-second clip of an adult cartoon show that was supposed to be funny. I assume the Venn Diagram between these mostly younger queers and the ones who think we should ban kink at Pride is a full circle. (This sounds glib here, but bear with me, friends. It’s relevant.)

That was how I binged most of Q-Force, and the show took off for me after Episode 4, “EuropeVision.” This episode allowed all the characters to be human, to go beyond the jokes. END_OF_DOCUMENT_TOKEN_TO_BE_REPLACED

In an effort to catch up my reviews (I wrote them!), I’m posting them in a bit of bulk. How I review: I watch it and live blog. None of the episodes I was spoiled for, and I tend to speculate about what’s going to happen next. Which may or may not come true. And as of today, I haven’t seen anything from Season 2.

Is it fairy tale land or is it a bad Ren Fair? For the first time, I don’t think that I’m as impressed with the fairy tale world.

Oh, Jiminy Cricket, you just want to be a good boy. No mixed messages from your parents about who you want to be or should be. Or if crickets are noisy or not.

Sounds like Kenzie is ordering Thanksgiving dinner, and Bo has some secret plans. Some secret fucks too.

Ooh, Bo just admitted to Kenzie that she was given a vision of killing Trick. Doctor interuptus…

The ladies are getting tailed by someone I thought was Ciara, but not. Besides Ciara would actually send people to do that work.

Oh, Kenzie, you are a woman after my heart. Shoes are very, very important. They are pretty and awesome. I’m with Kenzie that everyone needs to see her stems in those shoes. And I love that she’s dancing around in them.

Oh, Bo, your heart may be on the mend, but you’re not alone. END_OF_DOCUMENT_TOKEN_TO_BE_REPLACED

Sherlock is fast becoming one of my favorite shows. Between the smart plots, the attention to detail, the clothing — I did cosplay as Sherlock and the lovely Lisa was my Watson –, the modernism, and the pure delight of the world’s only consulting detective, I adore Sherlock despite its flaws. I’ll admit to loving the romanticism of the detective almost as much as Sherlock, and that my other favorite show, Lost Girl is an urban fantasy about a private detective.

I knew going into “A Scandal in Belgravia” that any plot with Irene Adler would be sexy and engaging, but problematic. Problematic because Irene is “The Woman”; she is the woman Sherlock puts on the pedestal and calls it love. And while Sherlock shows the progression of the mysteries our heroes solve, it’s also bias from the point-of-view of Sherlock. In fact, this episode was perhaps the closest representation of what goes on in Sherlock’s head that we’ve seen on screen yet. Heck, we see Sherlock’s observations literally on the screen before us. And to Sherlock, Irene is an ideal, a trope, a puzzle, and what he believes love is about. END_OF_DOCUMENT_TOKEN_TO_BE_REPLACED

Body bags, sexy. Really, Lauren, you’d think that was a blow-off. Even in the magical fae world of…well, magic. And with all those things you see all the time. That would sound like a brush off, not like you’re a crazy lady.

Also, seems like we haven’t cast who’s going to be playing Nadia. She better have a hot smile.

I’m so thrilled that we’re finally having some gay men on Lost Girl, and I love that Donny is Trick’s oldest friend. What a freaking sad story. I’m so glad this is backed up by Hale being a lady killer for comedy relief. Wait…does this mean that Hale won’t be in the rest of this episode? This is sad. END_OF_DOCUMENT_TOKEN_TO_BE_REPLACED

Oh, Kenzie, everyone wants Bo to open it too. But yeah, she’s too much of a goody-goody. And all brokenhearted.

Wait, did this become a Mark Millar comic? Suddenly, I’m getting some crazy flashbacks to some bad movies. Obviously, they’re fae women. Also Hale and Dyson need to be more on guard. Slackers. Someone in costume likes leather, a lot. END_OF_DOCUMENT_TOKEN_TO_BE_REPLACED

So I ended up watching this episode twice, and not just because of that scene my friends. Though that helped. Actually, our good friends in Canada, who are the only people who air Lost Girl, had some glitches, so I had to watch it again without glitches. But this did prevent me from doing my normal live-type reviews because I wasn’t sure I was going to be able to watch the entire episode. END_OF_DOCUMENT_TOKEN_TO_BE_REPLACED

“You’re a policeman who’s also his own police dog.” I love this line a lot.

Ooh, wet t-shirt contest. So Dyson has to take off his shirt and express his love to other wolf dude with the Irish accent: Caden.

I’m rather unsure how I feel about Kenzie finding the male-bonding stuff all hot. Is she fandom in this story? END_OF_DOCUMENT_TOKEN_TO_BE_REPLACED

Those are some shallow and not very quippy jokes of jealously and brokenheartness. It’s like Bo’s so bummed out about Dyson that she’s not even trying. Bo, no one believes that you can handle it.

Spell books always lead to bad things. I’ve watched enough supernatural shows. So does invoking Baba Yaga, because she’s totally going to be real on Lost Girl. “Perhaps you’re concentrating too much on Dyson’s junk.” Though it’s really nice that they’re bringing back in Kenzie’s Russian heritage. (We heard her speak Russian in the very first episode.) Oh, no, I saw this coming with Kenzie trying to get revenge for Bo through magic that will work in some way. END_OF_DOCUMENT_TOKEN_TO_BE_REPLACED