The episode felt like the first one with Eleven. This is a good sign as both Moffat and Matt Smith get to their feet about who Eleven is. There was very little Ten here.

I really enjoyed the atmosphere of the Starship UK. There were so many odd old-tyme things that it really set the stage. Their budget may have been cut, but the props department really worked their creativity on this episode. The set reminded me a lot of “The Idiot’s Lantern,” but darker, drabber, and aboard the Starship UK. END_OF_DOCUMENT_TOKEN_TO_BE_REPLACED

I don’t think I’ve talked a lot about Doctor Who on this blog besides my love of Donna. I think it’s most important to note that the Doctor is never my favorite character; in fact, sometimes he’s my least favorite and I think he’s a jerk. I’m not particularly attached to any Doctor or any actor playing him. (Except that Catherine Tate would’ve been an awesome Doctor, but I digress…)

I really thought my vampire thing was over. I read all Anne Rice’s books through middle school and high school. And I’ve been completely obsessed with Buffy: the Vampire Slayer and its spin-off Angel for years. Like let me sing you the musical, go out cosplaying, and attend fancons obsessive. Then my friend Gretchen insists I watch True Blood.

Both Charlaine Harris’ The Southern Vampire Mysteries books and the True Blood TV series have their flaws. They aren’t high literature by any means, and clearly fall into the category of beach-reading for the novels and trashy-TV for the show. The actors constantly drop their accents and Harris goes on and on about Sookie’s less-than-stylish outfits. And I’ve take to randomly calling out “Buuhill!” and “Ssucky” in mockery.

The first season of True Blood basically follows Dead Until Dark‘s plot. I whipped through the book knowing what was going to happen around every corner. Some of the little changes I liked better than others. When I got the second book, Living Dead in Dallas, I stumbled a bit with it, and likewise, I felt the second season stumbled. I’d been warned this was the weakest book in the series.

But what I couldn’t get over was the homophobia in Living Dead in Dallas. This book made me forever grateful for Alan Ball’s flimsy second season fixing the missteps the book took. Neither are gems, even in the vampire-porn genre, but True Blood‘s Season Two isn’t as offensive. END_OF_DOCUMENT_TOKEN_TO_BE_REPLACED 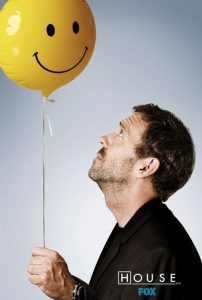 Be thinking about what to post here. Been thinking about it too long instead of just writing. Just writer, stupid. So I fall back on what I like to talk about: TV.

A random blog comment stirred my thoughts about House, M.D., which is a show I massively fell in love with (Seasons 1 and 2), almost gave up (Season 3), and won my loyalty again (Seasons 4). (It’s in it’s fifth season for those paying attention.)

House, M.D. is a medical show about the cranky, but brilliant diagnostician Dr. Gregory House. House is an unapologetic bastard. He’s also a cripple and walks with a cane. When he’s not tripping people with it, that is. House is by far my favorite character, perhaps because I am a little envious of his ability to put everyone on edge.

He has underlings — doctors by their own right — but who want the experience of working under an asshole a genius. In Season 1-3, it was the ducklings: Cameron, Foreman, and Chase. But ducklings grown into ducks that still hang around the pond with Foreman as lead. In Season 4-5, House hires Taub, Kutner, and Thirteen. Then there’s House’s best friend and fellow doctor, James Wilson, a rather needing man who prides himself on being there for his cancer patients. And Lisa Cuddy, the competent and hot doctor who’s also the hospital administrator.

Of course, the patient, the diagnoses, and the routine is not the point of the show. It is merely the window dressing. Granted, a good patient story is always more entertaining than one that that you don’t care a lick about the patient or even remember what was going on.

House, M.D. is a story of character studies, specially a study of House himself. The patients can related in ways. (Certainly not in the same manner as Grey’s Anatomy where every single patient is a direct link to the pain and joy and psychology of the characters.) Mostly, patients serve as the backdrop. The backdrop so Wilson can hold House’s guitar hostage and delete his TiVo. Or so Cuddy can yell at House while having hot sexual tension with him. And so Cameron can hold the hand of the dying and heal from her dead husband.

This is not a show where the A Plots really matter. This is a show built around B Plots. B Plots are what most House fans watch for. They don’t care how many time it’s not Lupus. They want to know Taub’s wife still loves him or if House is really addicted to Vicodin. (House and his Vicodin are one hotly debated issue that any and every fan will gladly go on a rant about.)

The world loves the asshole anti-heroes like House (see Iron Man and Anthony Bourdain), but building a narrative based on B Plots is why House, M.D. has endured as a show. And why it’s a little different than just a typical procedural. And if you have a thing for character studies, you might really enjoy the show.