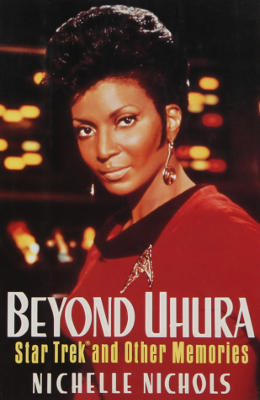 Nichols is an incredible person. Full stop. I’m so glad I read this book, and I recommend it to anyone who’s a Star Trek fan, interested in Nichols’ life, or generally curious about Hollywood and performing from the late 1950s to the early 1990s. Let me tell you, Nichols leads a life.

Beyond Uhura was published in 1994 when Nichols was 62. This was an interesting period in Star Trek history because creator Gene Roddenberry had just died; it was clear there would be no more Star Trek: The Original Series (TOS) movies; Nichols and other cast members had started publicly talking about William Shatner (TOS’ James T. Kirk) being a shithead; and many TOS actors wrote or would write autobiographies in this decade.

Nichols is a clear storyteller. And you can see how the stories presented here are the stories she tells herself about her life, her career, and her worldview. These I’m sure are mostly the stories she’d honed from the 1970s to Beyond Uhura’s writing on the convention circuit and in interviews. Though I will never say no to hearing again the story of how Martin Luther King Jr. convinced her not to quit TOS. END_OF_DOCUMENT_TOKEN_TO_BE_REPLACED