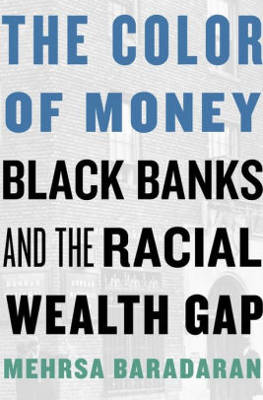 The Color of Money: Black Banks and the Racial Wealth Gap by Mehrsa Baradaran
Rating: 5/5 stars
#52Challenge prompt: a book recommended by a friend

The Color of Money should be required reading. Certainly, for anyone in economics, social justice, or who really wants to understand the mechanisms of money in America, particularly for black Americans. Often we forget — especially those of us born in the “colorblind” 1980s and 90s — that the United States is a young country. Slavery, the Civil War, and Reconstruction (and its failure) aren’t ancient history. Jim Crow and the 1960s Civil Rights movement were basically yesterday. And that all those things have lead to mass incarceration, extreme poverty, and broken economic systems of today.

What Baradaran’s book does is connect all these things together through money and formalizing of banking. Though the advent of the American economy — slavery — through how the economy operates up to the recent Recession. She breaks down assumptions and failed methods (both ones with good intentions and bad intentions) to build black wealth with cold, hard facts.

The Color of Money lays out how trickle-down economics has worked for no one, especially those at the bottom. How segregated communities cannot build wealth or operate healthy banks, and why the biggest wealth builders for white America post-New Deal (housing and access to college education via the GI Bill and other government initiatives) weren’t extended to black Americans. Baradaran also gives suggestions on how to move forward without leaving anyone behind, and what Reparations would actually look like.

The details are important because both Republicans and Democrats still agree on that black banks will work, that trickle-down and unfettered capitalism are great (for the most part), and that segregated economies can lift themselves up by their bootstraps. These are ALL failed ideas, yet are still looked on as good economic plans. As if they’ve made anyone, but the already rich richer.

These ideas are even creeping into newer, “disruptive” economic systems like cryptocurrencies. I just listened to Gabby Dunn’s Bad With Money episode about cryptocurrency, where they discussed trying to get more women of color into cryptocurrencies by setting up “social good” currencies that sounded exactly like these failed black banks.

The parts of The Color of Money I found most interesting were the sections on Nixon, and how Nixon worked to make any true support of black Americans, from either party, a dangerous political position. And how Nixon used doublespeak for his new racist policies, where he was both able to exploit black power and separatist movements (when he knew economically it wouldn’t work) and appease his racist base with actual policies. He also removed himself from acceptance of responsibility for what was happening in black communities as if POTUS isn’t responsible for all citizens.

I was also fascinated to see Baradaran breakdown the economics of how segregated economics — who don’t benefit from regulations or protections — within a strong economy — which does have regulations and protections — don’t work. “Ghettos had only ever had an economic system of unchecked, unmitigated, and absolute capitalism” (pg 179). She documented how it didn’t matter how many black Americans invested in black banks because these communities were, on the whole, poor. Due to lack of wealth, they didn’t get the guarantees and protections from the federal government, and in many cases, had special rules that put black banks at a disadvantage over other banks. Additionally, money never stayed in these economic areas because money cannot be segregated. Even if black Americans tried to only spend their dollars within their communities, it was unrealistic due to higher prices, lack of services and products, and just generally how the American economy functions. These areas weren’t their own countries; they are part of the United States.

To me, this is a better argument around why the recent SCOTUS’ ruling in Masterpiece Cakeshop v. Colorado Civil Rights Commission is wrong. There is no only buying your wedding cupcakes at the gay-friendly baker because that’s not how the American economy works. White America has proved for hundreds of years how segregating economies — whether by laws like ones during Jim Crow, or by how we’ve socially forced it — don’t work. (Of course, they are designed to fail, and that’s the point.)

As a white woman — whose poor ancestors definitely wouldn’t have survived and become middle class without the benefits of the New Deal and the wealth handed to white Baby Boomers — The Color of Money connected a lot of economic history together. I am someone whose great-grandfather was illiterate, whose grandparents fled economic depression in the Midwest during the 1950s, and whose blue collar, Baby Boomer father started his own successful autoshop, and minus a few bumps smoothed by government economic assistance, was largely able to support a family of five comfortably.

Had my family been black, this wouldn’t have been our story. I know we never would’ve been able to move to Eugene, Oregon in the 1950s, or other parts of my family who came even earlier to Oregon. Most of my family is not college educated — in my immediate family, I’m the only one with a college degree — and still, we’ve been able to build wealth, mostly live in the middle class, and access government services when needed.

I read The Color of Money as part of a political neighborhood group I’m part of. During our discussion, we had the honor of having a special guest, who is a black woman who worked in Seattle banks from the 1970s through the early 00s. I won’t discuss here what she said — since I do not have her permission to do so — but it was fascinating to hear her perspectives, and how when she read the book, she saw the larger mechanism of the economy that affected her family and the banking regulations/deregulations that affected her work. It’s not that Baradaran doesn’t use examples, or doesn’t clearly lay out how policy and other forces caused the black wealth gap, but hearing a personal story laid on top added yet another level of human understanding. We often view policy as abstract, but it has real consequences.

If we’ve learned anything it’s that economic systems must consider the people who use them, run them, work in them, and live in them. This seems obvious, but for too long, our political leaders and parties have acted as if the economy were a rational, untouchable force with its own whims and will. This is a lie. We will never have a better America while huge parts of our population struggle to meet basic needs, or as Baradaran says, “to make America great again, we should look at the redistributive government programs that made America great during the postwar era and emulate them in a more inclusive way” (pg 281).