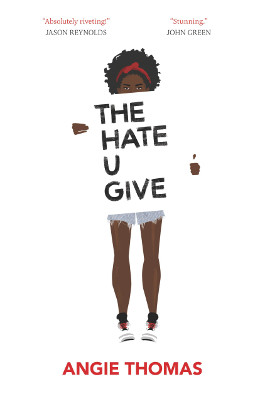 Review contains no spoilers you wouldn’t find on the back of the book or in the upcoming movie trailer.

My post-The Color of Money read was supposed to be “light.” Hahahaha. This is what I get for never reading the backs of books as they can be spoilery. In many ways, The Hate U Give is a great complimentary read to The Color of Money.

This fictional book is about being a black teenage girl in today’s America, and it deals with layers of identity, trauma, growing up, and current societal ills. Thomas’ writing is so engaging, and I definitely stayed up too late to continue reading.

Starr was an incredibly easy main character to like and care about. I both personally, through lived experiences, understood Starr’s trauma so deeply — we both lost close friends as teens to hate (albeit in different ways) — and didn’t at all — my white privilege. I loved her family, and how she learned about her voice. Which also makes The Hate U Give an interesting meta-appeal from a standpoint of representation in the voices we hear.

As a writer, I was pretty amazed the entire time I read this with how Thomas lays out the book and explores so much in this short six months or so of Starr’s life. Yes, at the heart of this book, this is about the very reality of cops shooting black boys and men and the resulting trauma Starr goes through as the witness to the crime, along with the grief of losing her friend and the grief of the community’s loss.

But The Hate U Give also touches on the impact of poverty, gangs, owning small businesses, private education, suburban neighborhoods, code switching, micro-aggressions, and casually racist white people. Not to mention some teenage angst around romances and changing friendships, growing up and understanding our parents and adult relatives as too human themselves, and how to balance prioritizing ourselves and our community.

The Still Processing podcast recently questioned if The Hate U Give in its film version, along with the films Sorry to Bother You and Blindspotting, are specifically crafted to blaxsplain contemporary black America life for white viewers. As it’s not up to me to make that call, it is important to hear this perspective from black Americans, and as always — as we engage with any media — give heed to those who lived experiences reflect what’s depicted in that media. I have not seen the film version of The Hate U Give so I cannot comment on the differences between these two versions, and I hope the film lives up to the book.

I wanted to include this cultural critique because of the very strong feelings I had around the book version of The Hate U Give. I spent a lot of time in English classes discussing the qualities and what made a Great American Novel (GAN), or any great novel in the canon of English literature. I’ve considered what GANs I haven’t read, and what stories I should prioritize in my lifetime to enjoy. As presented on lists of ‘the 100 greatest novels of all time’ and in classrooms (15+ years ago), these GANs were often books by and for white men. These were often stories of colonizers — the victor writes both the history and the fictional account of it — while these stories were presented as completely neutral in how one might relate to their brilliance.

By definition, a GAN is “the concept of a novel of high literary merit that shows the culture of the United States at a specific time in the country’s history” and written by an American author “who is knowledgeable about the state, culture, and perspective of the common American citizen.” GANs are often taught in secondary schools, and fill up college curricula. In my opinion, The Hate U Give is a GAN. It fulfills the deep knowledge of a time and place in American by an American author of high literary merit which reflects our culture. It should be read and celebrated as a fictional work of art about Americans and their lives. GANs are never the single experience, or experience of everyone, but they do bring a powerful American experience to light.