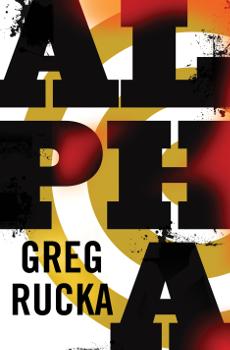 My initial impression: Rucka went on a vacation to Disneyland, got disgusted by the ridiculous capitalism, and wrote a book about terrorism in “WilsonVille,” a Disneyland-like place by a Disney-like company. I will admit this didn’t put me on the right foot with Alpha. I greatly enjoy going to Disneyland.*

However, Rucka is not wrong in that theme park terrorist attack would be eye capturing and make for a good thriller setting. Many other reviewers referred to Alpha as “Die Hard, but in Disneyland.” Which is why I won’t be talking too much about its plot details. And warning, Alpha is set up to flow into a sequel.

Rucka plays to many of his strengths here with precise detailing and his incredible knowledge of the workings of the military, intelligence organizations, terrorist cells, and weapons. He gives credit in the back for a park map drawn to assist his writing, but not shared in my paperback version.

So, why the 2 stars? (And yes, my rating isn’t about Disney.) The two stars are because the book feels phoned in. It’s weak compared to Rucka’s other work. (Goodreads informs me that I’ve read 32 of Rucka’s novels and graphic novels, making him my most-read author tracked on their software since I began using it.)

In addition to the details, Rucka’s other strength is typically his characters. Even if they aren’t 100% hero-worthy, they’re interesting in themselves. Jad Bell, our hero, isn’t interesting. The book also shares point-of-view with other characters, including Jad’s ex-wife Amy, his daughter Athena, and even a couple of villains. The narrative builds up a scene per chapter, and then doubles back in a time a bit before going to the next character’s point-of-view.

Instead of building up Jad, Rucka spends much of the book showing his deep knowledge of Delta Force operatives and their lingo as Jad is one. Sometimes it gets a little much, including even the mechanics of what names the characters are called.

Every character had double names due to their callsigns. Because the characters aren’t developed enough, matching names to callsigns became difficult the further I read. Then the villains had nicknames, real names, and civilian aliases.

Again, due to Rucka’s precision, I’m sure only the villains went down when the operatives were able to distinguish terrorist from hostage. But I lost my count of how many villains were left and who wore what.

This is also the one Rucka book where the women characters rang incredibly hollow. One of Alpha’s opening scenes features Jad — newly divorced, 40-year-old on a “vacation” in Alaska — hooking up with an unnamed, 20-something barista. The scene serves as nothing except that point out that Jad’s still got it — his commander thinks so to when he’s recruited the next morning for the WilsonVille operation — and for him to lament about Amy. The barista is never seen or heard from again. Jad doesn’t even bother to say goodbye, just gets up from a table in her coffee shop, the morning after, and leaves Alaska for California.

There is a similar scene with a terrorist boss “the Uzbek.” He’s feeling his power — safely in a hotel room an hour away from WilsonVille and monitoring the attack — and winks at a woman by the poolside, who then comes up to his room to have sex with him. Are we supposed to be seeing a parallel between Jad and the Uzbek? Because all I see are two women with no names with no purpose.

Then there’s Amy, the ex-wife. She’s played as shrill. Amy doesn’t listen to Jad’s vague warnings about canceling her trip to WilsonVille. They have a little side fight when Amy and company first arrive at WilsonVille. Jad maybe still loves her a bit, but she’s over him.

They share a kiss after he rescues her and a group of hostages she’s with — because, of course, his ex, his daughter, and her classmates all happen to be there the weekend of the attack and are taken as one of the like 20 hostages in a park of tens of thousands of people — and in this kiss, he feels how cold she is. And he’s upset she feels betrayed by his work. This couldn’t be because an hour or so earlier, she watched the terrorists shoot her daughter’s teacher and her love new interest dead?

Likewise, Athena, the daughter, is another victim. There are moments where you think she’ll contribute to her own rescuing, but then she fails to get any further, or is clocked in the head and hauled away by a terrorist.

Athena is deaf, and so are her schoolmates, and Rucka does a good job at showing how the experience would be different for them, and how Amy and their interpreter Dana struggle and want to make the villains understand that these kids aren’t going to respond in the same way to their shouting. Athena’s weakness is thankfully not her deafness, but that Jad is her father. She spends most of the time either making observations about the terrorists’ movements or focusing on how she knows her dad will rescue her.

Shoshana Nuri (callsign Angel, CIA operative) is the only woman who saves the day. While we see Jad show her respect and welcome her on the team without question of her loyalty — even though she works for the other government branch — Nuri makes the ultimate sacrifice at the end by taking a bullet for Athena. She’s the only character whose death is supposed to make a real emotional impact. But we also know don’t know much about her, except that she looks hot in a Penny Starr (WilsonVille astronaut girlfriend character) costume, and this even distracts Jad enough that he doesn’t recognize her initially. She’s the Mysterious Woman in a Spy Catsuit.

And finally, there’s Dana, who may be the biggest of all the victims. Dana’s the girlfriend of Gabriel, who’s our lead terrorist in this mission, a sleeper agent for a larger criminal organization, and moonlighting as a WilsonVille character actor. While a good chunk of the book’s from Gabriel’s point-of-view, we never get inside Dana’s head. She’s the saintly girlfriend, who Gabriel loves so much he may stop or even run away from his criminal bosses. He even wants to see Dana so badly at the end that he figures out the Uzbek is setting them all up to die by end of the attack.

Dana wasn’t even supposed to be there that day. She was called in last minute due to her ALS training. And despite Athena being a typical teenager about most adults, Dana’s immediately cool and her friend. Dana also works tirelessly to ensure the kids are safe as Gabriel works to hide his identity as a terrorist from her. When Jad tells Dana the truth about Gabriel, she almost breaks. But then follows him to Gabriel’s location to attempt to stop him one more time. She then crumbles away, never to be heard from again.

As I sat with Alpha, I wondered if I’d read Bravo, the sequel where Jad and company hunt the Uzbek. It’s sitting on my to-read bookcase. But do I care? I find that I care less and less about this world as if it’s just melting away. I mean, I know I’ve seen Die Hard, but do I remember what it was about?**

*While I agree with critique of Disney and capitalism, it’s so nice to have everything perfectly taken care of in your visitor experience. Especially when most of your life, you are the one who’s in charge of that factor.