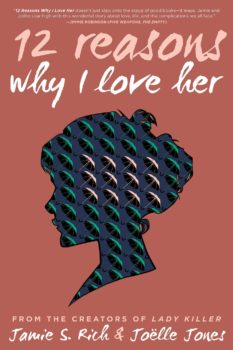 12 Reasons Why I Love Her by Jamie S. Rich and Joëlle Jones

I appreciate a romcom and a story about falling in love and then falling out of it. That doesn’t break me out of this story. But my two stars are only for Jones’ wonderful art.

Jones’ sketchy style here is something I haven’t seen her do before. Usually, her art leans to the highly stylized, and it was refreshing to see her doing something different. Black and white was a smart complimentary choice, leaving the lines open to delineate borders by using thick black inking.

Jones’ art soars in the characters’ faces that communicate the bulk of the story’s emotions. It amazes me how she can communicate bulk and weight. For instance, there’s one scene where Evan receives a paper suit. How she positions the characters, how the suit folds, and more tiny details all signal that this is fragile and made of paper. It’s quite brilliant.

However, 12 Reasons Why I Love Her falls apart in the storytelling. Both the pacing and the unfolding of the story are disjointed and don’t fit together. Rich chooses to tell a nonlinear tale broken into 12 segments with song titles to kick off each.

Part one shows Evan and Gwen out on their first date, which goes badly, and the second section shows their first anniversary. After the first part, you do wonder how these two would ever be together for a year. This disjointness continues through the rest of the tale. There was no reason why Rich chooses to make this nonlinear in structure. My edition includes an original script, which shows that he did not write it as such.

We don’t ever quite understand why Evan and Gwen fall for each other or see their love in the middle. We only see them at their beginning and their end. What kept them together for that year?

The ending of the relationship was also problematic, which happens in part 11. Evan becomes incredibly jealous when he finds out that Gwen got flowers from a man, who turns out to be an ex-boyfriend. When Evan confronts Gwen about it, she tells him a story about how she got pregnant (accidentally), planned on having an abortion (against the wishes of the ex-boyfriend), and then had a miscarriage and drifted away, without resolution, from the ex.

This former relationship plays on the misogynist problem of the mysteries of reproduction and cis women’s “secrets” and their hold over women-loving cis men. It allows Rich not to have to take a stand on abortion and have his cake and eat it too when it comes to Gwen’s story. This convenient miscarriage trope of uterus-having people, who seek abortions, instead of having miscarriages, is too common, particularly in TV and movies or other places with corporate censorship. But Rich — in a small run of an independent comic book published by Oni Press — does not have the same pressure.

But don’t worry, manly Evan does not fall for this tragic story. Instead, he figures out that Gwen’s trying to dump him by default and yells at her that he wishes she would die. The last words he says to her are, “Goodbye, Gwen. I hope you die.” This panel ends segment 11.

Then Rich kicks off the final segment to the first moment Evan and Gwen meet. He uses the song, “Real Love” by noted woman-beater John Lennon, as framing. It feels like a slap in the face to have Evan wish Gwen’s death and then see the moment he’s drawn to her. But instead, I wanted to tell her to run away from this man. I wanted them to be over with. I wanted justice for Gwen.

12 Reasons Why I Love Her came out in 2006 and Rich complained about the criticism he’s received for this book. Most of this criticism was due to the terrible pacing. However, my printing is a new 10th anniversary edition from 2016, so this book has been popular enough for a reprint, and no doubt from both his and Jones’ raised profiles in comics. This book shows the incredible weaknesses, even for something co-created by a woman, has in its treatment of women and what’s being put forth in a once solid romance comic genre.

Romance comics were historically incredibly popular with girls and young women and why, at one point, comic book readership wasn’t skewed male. (Though on the creative and production side, even books aimed at girls and women were primarily made by cis men.) If Oni Press wants to diversify this category, 12 Reasons Why I Love Her is not the way to do it.