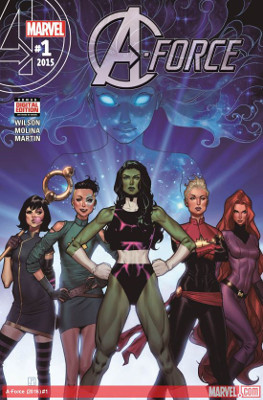 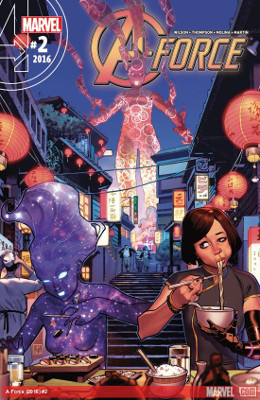 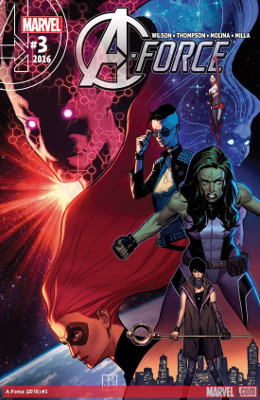 The first issue of this was a little meh. I’m not sure I’m as entranced with Singularity as many of my fellow comic geek friends seem to be. There’s always depths in stories where only one character remembers the past. But I’m not sure Singularity is as complex or deep of a character to fully realize that potential. Right now, she’s more of a super trusting cute puppy in the narrative. I’m also never sure how books coming out of major crossovers really function in the great world when many fans — who this book is probably targeted at — don’t read those. Or at least understand the greater consequences to the universe and changes. I know I read Runaways, A-Force, Siege, and Captain Marvel and the Carol Corps, which honestly was a crap ton of event books for me, and I’m not even sure I understand what Battleworld actually was.

Additionally She-Hulk, Captain Marvel, and Medusa are main stars in other books. I’m never sure how the continuities work together, especially when I’m reading 2 of 3. (And honestly I have no idea if Nico and Dazzler are major players in other books.)

In general, Anti-Matter isn’t that appealing of a plot for me. Nor seeing the other characters interact with someone who clearly remembers them, when they don’t, and perhaps this is because I’ve read lots of books with the rest of these characters.

That said, I will give this book a try, so we shall see.

Wait, what happened to Nico’s arm? *Goes to Wikipedia* Oh, some big event and it’s a “witch arm” whatever that means.

Kind of like how Nico tries to reconnect with her family — who aren’t evil like her parents, I assume. Of course, every time Singularity goes somewhere she inevitably doesn’t make the world’s best impression.

Medusa’s and She-Hulk’s conflicting opinions here seemed more in character than issue #1. Don’t know if that’s the addition of Thompson as co-writer or what. They just seem to disagree more like people who are on the same side, not those who are opposing each other.

I really love this reimagining of Dazzler. Especially that she can actually fight back at Anti-Matter. Dazzler has been treated as a silly character for far too long. Her new look is sharp and modern, which is fun since many creators kept her in her disco looks for far too long.

Dang, I didn’t expect them ever to kill off Dazzler. Perhaps Singularity will do something next issue to revive her. Dazzler may not be excessively popular, but she is very well-known and has a solid fanbase. Of course, no one ever stays dead in comics anyway.

I’m really loving She-Hulk here. Especially when she rips off Anti-Matter’s head (even though it doesn’t kill him) in reaction to him killing Dazzler. The dialog is also spot-on for her.

Nico seems a little naive about the world here. Or like she really is trying to hang onto a better idea of the world.

Nice to see Singularity stand up for herself and go after Anti-Matter. Especially since in the original series, she was much more willing to fight to save others. Which makes her change of attitude make complete sense.