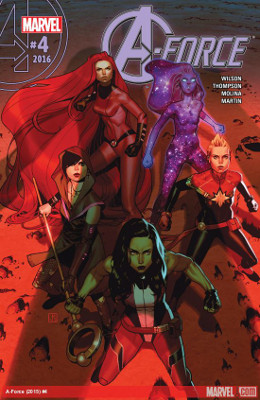 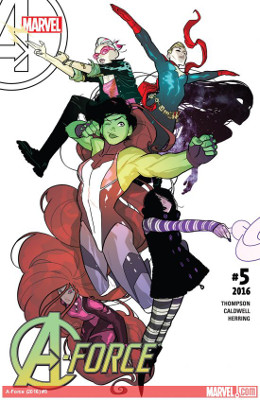 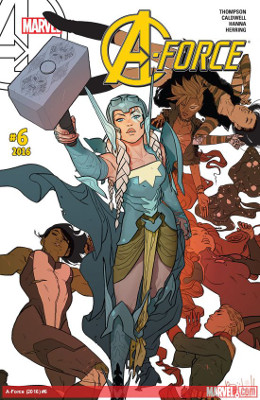 This book had some great moments that peeked at where it could be. It wasn’t a bad wrap-up to the Anti-Matter storyline (well, sort of).

My favorite parts were the emotional bits with Dazzler. I love how much character she’s given here and how her changes in character are expressed.

Anti-Matter as a villain bored me. I wasn’t interesting in the drama or the opposite day as it were. There wasn’t much there, except “I’m the opposite of you and now I will destroy you.” I get this book was supposed to set up the ladies and see how they would come together as a team. But it felt hollow.

I kind of just want more about this makeover spell Nico’s planning for her and Dazzler. Or She-Hulk and Medusa arguing. I liked how no one disagreed that Carol was boss of space. All things in space.

Molina’s art is great. I love how he draws expressions, especially when they’re in action. They look like fierce superheroes ready to kick butt and take names.

I’m super loving the makeovers of both Nico and Dazzler. Dazzler’s look brings her closer to her original gear, but still has a hard edge. And I want everything about Nico’s look. That coat is brilliant with those large buttons. In general, Caldwell’s pencils are great with modern styles. Everyone looks like it’s 2016, even if they are Thor Dazzler from another dimension.

I’m still not sure what the point of Singularity as a character is. Or maybe what the appeal is. I guess we can have characters of all types and abilities.

Thompson does a wonderful job at bonding the women together. Sure, they have a time — and a few like She-Hulk enjoy — fighting the Countess in flying dragon form. Also nice Astoria coastline.

I loved the scenes with them getting dinner together. Especially Thor Dazzler and She-Hulk bonding over how much food they can eat. It was really nice to see that superheroes have needs, like food and drink.

The reveal that Dazzler’s dying due to Terrigen Mist exposure was well-done. I like her making Thor Dazzler promise not to tell the others.

Of course, the Countess would target the other magical person and kidnap/enchant Nico.

Caldwell’s art and Nico’s outfits are currently my favorite things about this book. The story itself isn’t grabbing me. I can only hope it will get better, but there’s a big crossover event happening soon, so that’s unlikely from an editorial point.

The Countess seems to have an easily figure-out-able weakness. Though it was smart of mind-controlled Nico to disable their powers. Even if apparently Thor Dazzler could still call her hammer. Though I’m not sure how she could pick it up without her powers — but I guess it’s debatable of whether or not the hammers are heavy or just only can be lifted by those worthy of them. (Though how is someone who’s under mind control worthy of the hammer.)

There’s always going to be trouble when there’s a rampaging hulk. I’m kind of surprised the Countess even bothered to put She-Hulk under her spell before having Nico do that spell. Like a raging hulk is always bad.

The jokes about Medusa’s hair were basically the best.