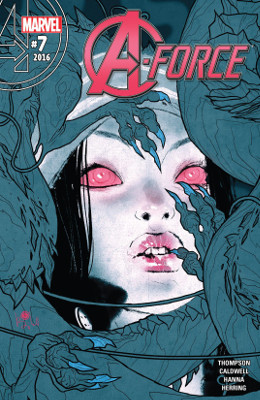 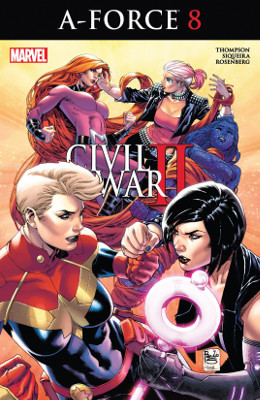 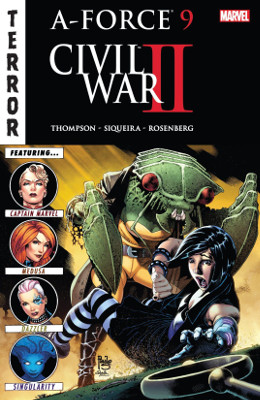 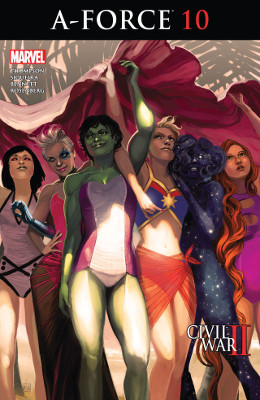 Unsurprisingly, the A-Force pretty easily defeated the Countess when Nico was out of her control. As much as I love magical characters in the Marvel U, they do often serve as a “fix all” or a “destroy all,” depending on their alignment on the good-evil spectrum. They also just are sometimes far too powerful. Even if they have some kind of artificial limit on their magic, like Nico only being able to use a spell once.

Caldwell’s art was okay. It felt rushed in many cases. I do appreciate how, even in the rushed state, he was able to draw each woman as her own character. Too often artists, especially male artists, draw women as one woman with different color and length of hair and different costumes. Usually, often too close to the “Western beauty standard.” So I’ll give him props here for that.

Dazzler Thor disappearing back into her dimension wasn’t unexpected. I don’t know why they’d thought she’d stay. She came to defeat the Countess, and that’s what they did. Though Thompson did a good job showing Dazzler’s connection to her counterpart, especially with the Terrigen disease.

The two very best parts of this book were: Misty Knight and Elsa Bloodstone. Otherwise, it was a meh crossover. Siqueira’s pencils were not my favorite either.

Misty, Nico, and Elsa should have their robot arm and hands twins club. Forever. I’d read that book for sure.

Elsa says “darling” a little too much. But she swears just as much as she needs to. I’ll never say no to this monster hunter. She always makes the tale more interesting. She’s seemingly indestructible.

Let me guess that Alice will turn into one of those bugs and Nico will kill her.

This whole Civil War II plotline is not my favorite. Not even my favorite conflict or ethical problem to hash out in a comic book.

So much exposition. Like so many words coming out of Carol’s mouth, especially. So much debate. So much trying to shove this situation into the Civil War II bucket.

Not that I would want more people-bug fighting.

No one really thought they’d stay mad at each other for more than two seconds. I just don’t see Dazzler and Medusa working things out that quickly.

Of course, Nico’s in the situation where she must kill the girl-bug to save the entire town and save Carol’s life. (And maybe Elsa’s, but it’s unclear since Alice apparently has people legs and still wears part of her clothing.)

First, this cover by Siqueira ad Rachelle Rosenberg has to be my favorite of all the covers for this title so far. I love them in their swimsuits, and how all the suits reflect their personalities and their bodies. This fits with the art in this book from the first issue on.

I had no idea this would be the last issue of the series. Time for me to tweet at Brevoort. I was planning on removing it from my list as it’d been waning on my attention; I’m trying to cut back on books to help my budget; and frankly, the massive Trump donations by Marvel’s CEO and Diamond’s CEO put a nasty taste in my mouth. (Aka, I don’t need to be funding those assholes and cutting Marvel books means doublewhammy.)

Okay, onto the actual book and what the actual creators (who I’m happy to support) of this book have put in front of us.

Oh, Elsa became the bug ready to kill Carol. That’s what the pants were about. Took me a moment. Until they all, except Singularity and Nico, transform into bug creatures. I kind of think that Carol should’ve had some bug superpowers or something.

And killing Alice really didn’t kill her. It killed her human form, and she turned into some kind of insect woman creature, who could talk. Of course, Carol and Medusa wanted to take her away to study.

The exposition in the last issue made much more sense in light of this being the last issue. Still doesn’t make it my favorite, but Thompson was keen on wrapping things up.

Elsa pretty much remains the best ever.

The ending scene seems to be missing a Patsy Walker. Especially since the two books seem to have synergy. Even if yeah, I get the point of just having the original team together.