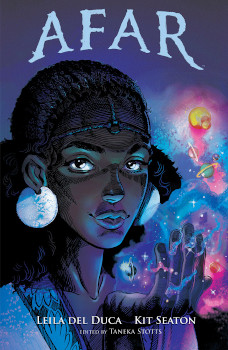 As a concept, in the art, and in the characters, I loved Afar. Unfortunately, it felt short, and parts of the story — particularly Boetema’s travels in space and both her and Inotu’s travels in their world — were not given their full realized due. I wanted another volume of Afar, not because I like this universe (I did), but because it felt unfinished.

This world is some kind of post-apocalyptic in positioning, but that’s not the story Del Duca and Seaton are telling. Instead, it’s about a brother (Inotu) and a sister (Boetema) and their struggles for survival. Their parents have mental health issues resulting in failing to hold down jobs, forcing the family to move often and, ultimately, the parents to leave the kids to work on a temporary gig elsewhere. During this time, Boetema’s astral visiting of other worlds are solidifying, and Inotu gets himself into trouble with local oligarchs.

The story is framed by Inotu’s writing and Boetema’s strong experiences. These two balance out the fantastical with the practical. These siblings must live in both worlds, or they cannot survive, much less thrive. I enjoyed their familial relationship, and how, when it became very clear they needed each other, they also confirmed that they respected and loved each other over the need.

Seaton’s art drives the cohesion of the story. When Del Duca misses a transition in Boetema’s travels, it is Seaton who pulls it together. Their creativity in creating new aliens and lands always ties back into the look of the book. Even when a new world is populated with water and octopus-like people and the teens’ world is a desert with mostly humans, it all fits together.

I adored the desert world and the markets full of people and goods. Seaton added little flares here and there to round out the texture. Del Duca brought excellent characters followed up by the fabulous details of the art. The agama wanwitu was the most adorable creature.

Where Afar holds up less well is introducing characters who feature in the story several times, but aren’t our leads. Seaton’s designs remain distinctive and fabulous. However, the characters don’t stand out in personality. I wanted more from them, or to not flip back to the pages where they were introduced to figure out who was whom.

Beotema also goes from completely not understanding what’s happening to her to immediately knowing how to use her powers. She spends little time with the beings who hold the keys to the knowledge about this astral projection, and she can suddenly go back to the world where she believes she caused another character’s death.

Here, Beotema finds out that he’s still alive, and she solves one of the major problems through her own knowledge, while giving herself away as an astral traveler. Luckily for her, the people she’s visiting already know about that kind of power and are unafraid.

This story feels unfinished. While we see Beotema finish this one mission and the two siblings create a sustainable life in their new city, we don’t see them have a balance, or if their parents come back to make the family whole again. As someone with family members who struggle with mental illness and alcoholism, you kind of wait for everything to blow up again when they’re untreated, and Beotema and Inotu have to feel that impact. Nor do we have a resolution for Beotema’s powers and how she grew, or Inotu’s crush and his new skills.

I hope Afar gets a second volume someday as I’d love to read more of these characters and this world.