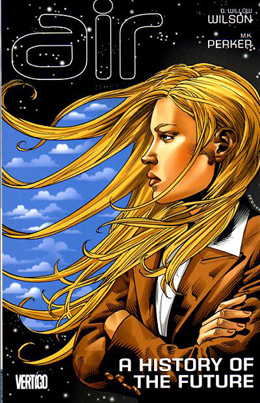 I really enjoyed this volume. I think it brought the story right back to where it needed to go. Yes, Blythe getting her wings (her official hyperprax pilot’s license) was the next logic step in her story. It also provided some grounding, which I think the last volume lacked.

The stability of this story rang through extremely well in those first few pages. Just that fact that Blythe woke up next to Zayn without needing to search the universe for him provided a large helping hand to keeping this narrative very tight. I could not put Air Vol 4 down once I began to read it.

I love that Blythe takes Mrs. B and Fletcher with her on her adventures, and I felt that her meeting with Quetzalcoatl was really well done in that Blythe recognizes him fully as her crutch.

I thought it was a great tie-in that they go to Russia and meet up with their ballerina friend Valentin. And that they get to make a joke about him always being in his ballerina tights. A lost luggage storehouse does make a great vault for treasures. I can’t wait to find out how Jules Verne was able to write a novel all about Blythe’s life.

Renee becomes a lot more intriguing as a character in this story. While she’s certainly out to make Clearfleet a bunch of money, she seems to have more motivations that she’s not telling. Or she just really wanted to know the future so she could bet on the right side.

Blythe’s tolerance and heart were certainly put to test as she crash-lands Antoine de St. Exupery in the Puget Sound. And I love how Blythe makes up her mind about continuing with Clearfleet. She realizes that her life can never be normal again and how she can’t not help. I love how Perker draws the different expressions on Blythe’s face as she comes her decision and realization to continue on.

Blythe’s ultimate battle with Lancaster was an interesting show of all the different types of powers Hyperpracts have. Seems to me that they can do much more than just fly planes. But I guess that’s the point. I’m surprised Blythe didn’t figure out that Lancaster was a Hyperpract too earlier.

Lancster’s half-destroyed face was a little too Two-Face for me. But I suppose what else is an artist supposed to do? Perker probably didn’t want to make it too gruesome.

I loved Blythe’s gravity trick and that she sent him off with Quetzalcoatl. I’m glad that Blythe saved herself, while at the same time, it was nice to see Zayn more actively attempting to help her.

The one thing I hate about this book was Fletcher’s death. Why? I love the snarky, ambiguously gay and asexual dude. He was such a needed comic relief. I will miss him.

I’m not surprised one bit that the story ended up with Blythe and Zayn getting married. Well, actually, it ended with Blythe getting her wings. And her long gold scarf. Which is more awesome.

Buy Air Volume 4: A History of the Future by G. Willow Wilson