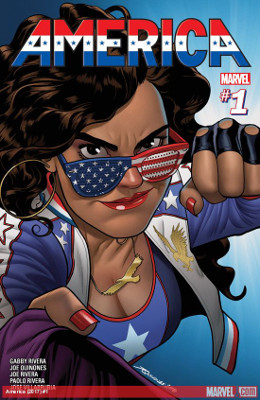 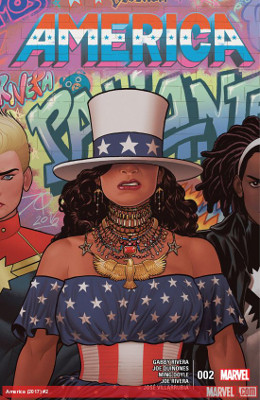 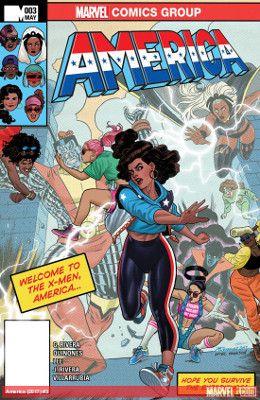 This was almost five stars for me. It was getting there, just hadn’t happened quite yet. I can definitely tell I’m going to like this. I have to give Marvel some credit for hiring a queer Latina writer to write a queer Latina character. However, we will see how they market the book.

Can I go to Sotomayor University? Can this be a real thing? Can we just learn how to be woke and take history classes based in the badassness of indigenous women?

I don’t know anything about the Ultimates, but I do adore Monica Rambeau. I also enjoy a lady who’s confident in her punching. Punching out stars. I kind of hope that Rivera explains (or tries to explain) America’s powers a bit more.

Poor America gets her heart broken. I love how she calls out Lisa’s bullshit about it being for the best. But sometimes, breakups are for the best. Sometimes, you gotta leave to let people run and grow on their own. Even if it sucks a lot.

Prodigy is the best. I’m so happy to see him in this book. However, he should know better that America is impulsive and not scared of anything. (Except perhaps the moment her moms died.) Otherwise, she’s pretty indestructible.

I was worried that America would get stuck in the 1940s. I’m glad to see otherwise. This power to move through time seems to both be a power of America’s and some aid from her teacher, Professor Douglass. Or maybe those fangirls. It feels like the right kind of meta.

Moon Girl and Devil Dinosaur can come and visit anytime. I love Lunella’s speech here. Not to mention that finally she’s getting some recognition for being so brilliant. Even though college students all agree Lunella’s the bomb.

Maybe I’m a little disappointed that those bratty kids turned out to be robots.

The Chavez Guerrillas are going to get their butts kicked by their idol. I wonder if this will make Lisa feel differently. Or is this what it will take in order to make America pay attention to Lisa. Though college definitely offers a lot of opportunity in the dating realm. (Or so I’ve heard as I did not do a ton of dating of multiple people in college.)

I felt this book did a much better job at explaining the universe (and somewhat exploring America’s powers) than previous issues and other stories featuring America. I greatly appreciated the details about Sotomayor University being outside regular time and space, which makes more sense about the dimensional and time travel even students who are not America seem to be able to do.

I assume the ancestors who lay out a plan for America and who are shown in the afterlife are her mothers. Or perhaps a grandmother.

It was nice to see America being mentored by Storm, who’s probably the most famous women in color in Marvel’s lineup. It gave a nice rounding out to the story to have a familiar character there. And who doesn’t always love Storm with her badass 80s mohawk. For sure, it’s her best look.

I completely identified with America not being able to meditate or buy into the centering oneselves narrative. I have the same issues.

The Leelumultipass Phi Theta Betas are ridiculous. But so are the Chavez Guerillas. I do, however, feel better about them when we learn that they want America to come back because she didn’t actually finish defeating the baddie. The baddies who break down into little tiny versions of themselves whenever you punch them are the worst for heroes with super strength.

The letters in the back of this book are just <3.