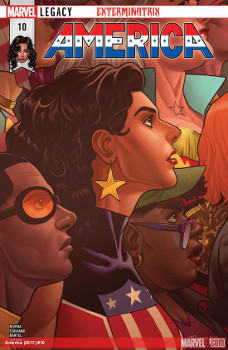 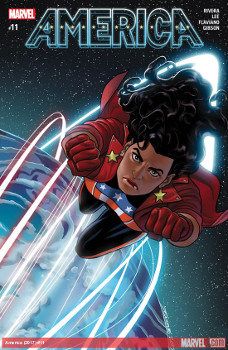 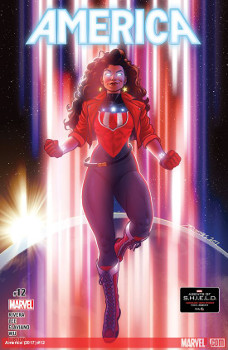 I’m not so sure Rivera’s climaxes have been great. This feels weak from a narrative, and a bit of a ‘of course’ in how it falls together. Does ‘of course’ just mean it was well-laid out? I’m not sure.

So Bartel’s art saved this a lot for me. I want more of her on this book. So much more.

I am excited to see America head to Planeta Fuertona. Though I do wonder if this is just happening since America, the book, has been canceled. That makes me sad. I feel like we had some great characters we were building up, but now we will never really know the student of the University of Sotomayor again.

Like we never figured out the professor’s connection to America’s grandmother. We never really got to know the Betas. Rivera threw us in deep in a world, a world full of potential that Marvel canceled.

Salgado may just be the rebound girlfriend America needs to get over her recent events with her exes. I felt Rivera was a little too glib with how America might feel about getting her heartbroken by one and then betrayed by the other. So it would be nice to see her explore a new feelings.

I do hope Madrimar is okay. Like on one hand, Rivera is quickly wrapping this up and now that America’s dedicated to helping Fuertona, is Madrimar needed? But I want America to have her grandmother for a while longer. For her to have that family.

It’s good that we got exposition about Fuertona and the crystals before America went to charge up on all of them to defeat La Legion and then failed. This is in a way a big test for her given that she is impulsive.

I just hope this impulsivity doesn’t get her grandmother killed in the final issue.

Rivera gives America the best send off possible. We know that America will do great things, and she’s become the starling of her people. Already, she has grown enough to become a peace keeper and figure out the misunderstanding between her people and La Legion.

Turns out La Legion was dying and needed the energy to live, and they were guaranteed it by the first starling. Who happened to turn to quartz…and thus, couldn’t tell everyone else about the deal. Though it seems to me that someone before America should’ve at least tried to figure out La Legion’s language.

Yay for America being able to save her grandmother, and for getting to see her grandmother’s house for the first time. Those dragon-dogs were adorable. I’m sad we won’t get more stories with them.

I did really enjoy this hopeful ending. I hope America’s character growth stays in Marvel canon and that Rivera continues onto even more comic book gigs.