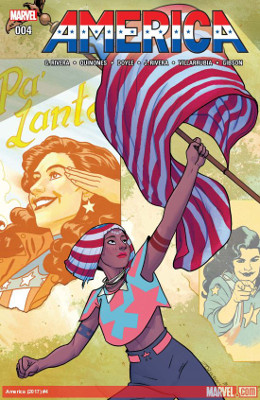 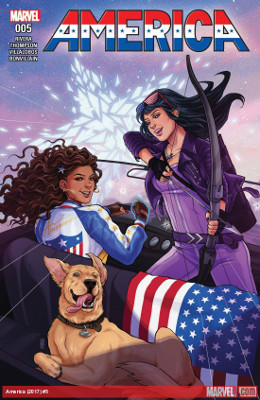 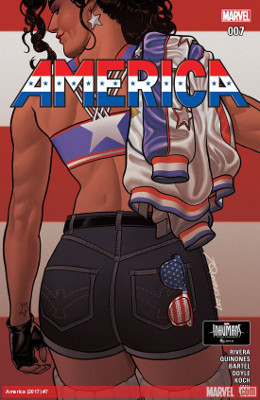 This issue weaved a lot of the plots together. Which made this book less messy. I know there’s constantly a back-and-forth around superhero comics and how easy-to-understand all the plots must be. There’s an idea that you should be able to pick up any issue of any superhero comic book and be able to understand what came before (recap), what happens during the issue, and what may hook you to pick up the next issue. But America has been a bit jumbled. Even for someone, like myself, who read those other comics featuring America and her journey.

I loved the glimpse at America’s mothers. Amalia and Elena get names here, which is always exciting. Their names also made for the best password for the past America to talk to the current America so they could kick some collective butt together.

I assume we’re going to learn more about the parallel utopia in the future. And also what America’s moms did to save her from its destruction and why (beyond her being their beloved daughter).

Lisa and America are cute, and it’s nice to see that resolution and adult nature of their breakup. Because you can still love someone and break up with them if it isn’t going to work. That is a real adult thing. You don’t have to fall out of love with someone before you leave.

The fast-talking pacing of this was ridiculous. The pacing was incredibly disjointed. Since there was little to no reason for America and Kate to see each other beyond being best friends, this should’ve just started mid-road trip, it would’ve saved a lot of the pacing issues.

I’m not sure about the lingering questions of Madrimar or why they aren’t being focused on. Spring break is downtime, and Kate is a detective.

Mags just always seemed destined to break America’s heart once again. Those girls who can’t be honest with themselves.

I guess we’ll see about these robots.

I like Madrimar a lot more than I thought I would. Especially now that we know her motive is just to be America’s grandmother. (Though there is a lingering question of why America was never introduced to her grandmother or other family members. Especially when her moms knew the utopian parallel was being destroyed.)

The power kick was a great move. I can’t wait to see what America learns as she digs into her powers.

Not sure what I think of Mags. It doesn’t surprise me that the baddies were holding her father over her head.

Arcade was even more of a whiny boy than he’s usually portrayed as. His powers seemed weaker, but it did make sense if he was working for someone else and trying to be a good minion. I’m just never a fan of the “fight ring” trope in supernatural or superhero media.

Villalobos’ drawing of Kate’s hair was rather unflattering and incredibly dated. Which made it unbelievable for her as a character. It was especially bad in the goodbye scenes at the end. Going from the hug scene to the next two was like a completely different character in the same costume with black hair.

I do love Kate’s and America’s friendship. It’s the best.