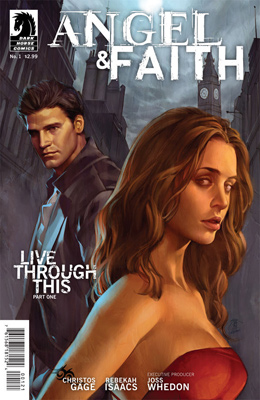 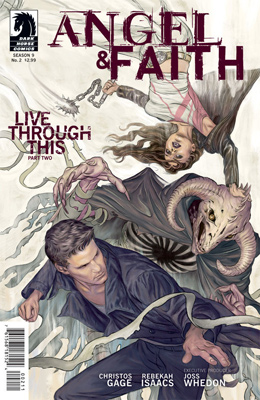 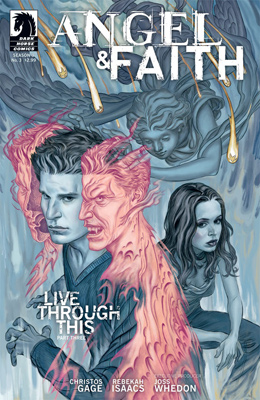 I was really impressed with this comic book. This is from someone who swore up and down that she was not going to pick up another Whedon work (or Whedon-based work) after seeing Serenity and reading Astonishing X-Men. I’m not sure how this book would read for a fan who doesn’t know Buffy: the Vampire Slayer and Angel canon and doesn’t at least know what happened with the whole Twilight thing in Buffy season 8. (I may not have read it, but I know through fannish osmosis and reviews.)

Okay now with that all over…

I think Gage does the best job with Giles. I love who his Giles is, both in what he does (did) and how his journals come across. This was really impressive given that I’m really picky about these characters’ voices, in part because in addition to watching the show 5,000 times, I’ve also read countless portrayals of the characters in fanfic. (Say what you will about fanfiction, but the good fanfic out there is often better than the official sactioned tie-in comics and books.)

While I don’t buy Angel as Twilight, I do buy that no matter what Angel is always seeking to redeem himself. I like the team-up with Faith, because yes, she would be the one to stand by his side and not care if Buffy and company kicked her out of the gang.

The only thing that felt off to me was Angel drinking from the girl; not that he wouldn’t solve a problem like this, but that I have a hard time believing he wouldn’t go out of his way not to hurt a child after Connor.

Anyway, I’m glad that I picked this book up. I’m also not surprised that Whistler just might be a little evil. But I’m not sure about this whole Angel trying to bring back Giles from the dead thing. (Though I applaud any universe where there is a living Giles.)

I saw this entire Faith tries to turn Angel into a human plot from very far away. Very very far away. And I must say that I’m a little disappointed. I’d much rather read a tale about Angel and Faith running around cleaning up the consequences of Giles’ death. (Also is it just me or did we not actually hear what Giles had to say about why he didn’t want resurrection? Or are we just supposed to assume that it has to do with him seeing people, i.e. Buffy, resurrected before?)

Faith is right that Angel doesn’t seem to have his heart in it. Though her voice seemed to wobble this issue. More action, less exposition?

This book continues to entertain my socks off. My only wish is that Isaacs spent a little more time on the art and the backgrounds because when she fills the panel, it’s extra grand. That and the Pearl and Nash story just seems like it needs to be a focus in another book, another storyline. They are not the interesting plot.

Gage writes a really great Angel who just hates himself, the monster, but tries to make things right. He’s also stubborn and really, really wrong about resurrecting Giles. Angel being really really wrong about something makes this an even better book because yes.

Faith as the responsible adult is pretty awesome. While she’s correct in working to stop Angel from resurrecting Giles, I do think she’s wrong in turning Angel human with the Mohra blood. For a moment, Faith had it right; that Angel would just keep on fighting even if he was human.

I thought Isaacs did a really great job drawing the world of Alasdair Coames and his magical pets. There was such great details. Like Angel petting the cat. I also really enjoyed the touches of drawing Faith and Angel undercover at the fancy party. Though there’s no way Faith could fight very well in that red dress.