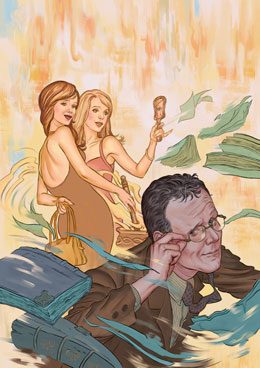 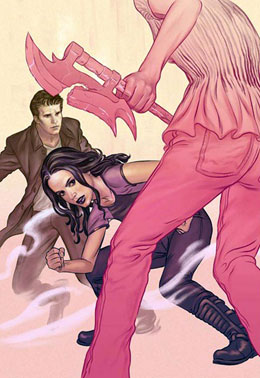 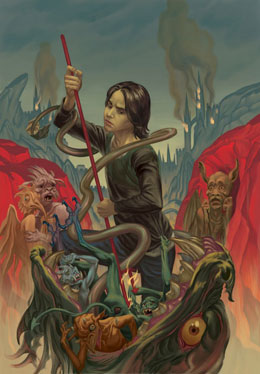 Okay, Rupert’s aunts make up for everything. Lavinia and Sophie are the best ever. I love that they care about him, and how they consider themselves shallow, not stupid. And when Lavinia tells Angel she’s not trying to sleep with him, best rejection line ever — “Oh, that’s adorable. My dear Angel, if I wanted to shag a corpse, I’d have gotten married.” Win.

I hope that they become part of the regular cast of characters. But somehow with Willow in the mix, I doubt that. Willow may turn up to be the voice of don’t resurrect the dead.

The random monsters wanting their due was pretty cheeky. Of course, there were way more monsters in that outside house shot than Angel and Faith claimed to have killed. The door joke was pretty cute too. Sometimes you have to wonder how many doors they have in storage and if they get a bulk deal. It was a good thing in BtVS S7 that Xander was a carpenter. (Even if it made him a little too Jesus-like in another way.)

I want more wacky in my comics. With back-story about cute little Rupert and how his aunts feel responsible for him being shipped off to Watchers’ school so early. This is the kind of story that I love.

Yes, the incredibly bad decision about going to Quor’toth. This is like an awesome comic book now. I’m such a fan of Willow and Angel making bad decisions with Connor supporting them.

We can all just agree that no one should be giving parenting advice. If anyone, Gunn was probably the best “parent” when he raised his sister. Even if she did end up a vampire, he at least had the strength to kill her. I mean, can you imagine what Angel would do if someone turned Connor into a souless creature? (Oh, wait, Holtz tried to.)

I do like that they’re playing Connor as more mature than Angel. Because yes.

Also Gunn. I fucking love Gunn. I’m sorry that he’s not going with them to get more screen time. But at the same time, it makes sense that he would be the one to stay behind.

That said, this does seem like a pretty easy solution to get all the magic back in the world. A little too convenient. (Of course, that’s not why I’m reading this comic book.)

Connor being Quor’toth Jesus is a little ridiculous. And of course, both he and Angel stayed behind. That’s how they are.

I loved the reveal that with magic leaving Earth that Connor’s fake life left too. It was a stupid sweet moment with him and Angel. Just the kind that Angel totally digs.

Willow being like “stop bullshitting around, Faith” was great. That she just called Angel out about what happened in Plyea when he changed into demon form.

I’m a little bit over this whole “master” vs “destroyer” language. It’s a little weak and ridiculous to always portray demons as simple-minded. Not to mention, sure they’re practicing love, mercy, and compassion; however, that doesn’t mean you wouldn’t think that over the centuries, they’d learn a few tricks about saving themselves. Instead of just waiting for Jesus.

Gage better not kill Lavinia and Sophie. For they are awesome, and the whole Twilight thing was stupid. And remains so.