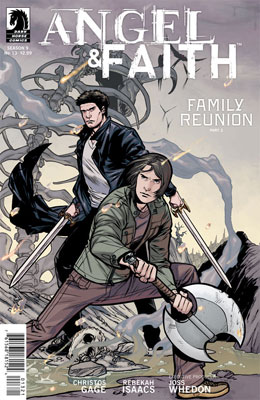 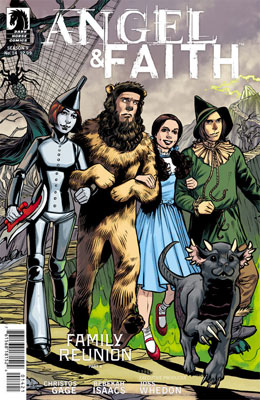 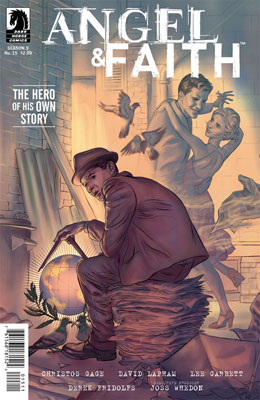 So glad that the Lavinia and Sophie didn’t die. I approve of that. Not sure what Whistler’s up to. I mean, I assume there’s something that I missed due to not reading the Buffy comics and the whole “Twilight” arc.

Quor’toth being a literal demon that controls/runs the dimension seems a little too obvious. And Isaacs’ art got a little wonky as she tried to draw the creature. I kept thinking that all they’d need to do is climb on top of it and start stabbing its brain. Of course, if it’s defeated by love and kindness, evil Willow isn’t really going to solve this problem. I thought for sure when Connor called Angel “dad” and told him that he loved him that the creature would be even more distressed.

Faith does give the worst pep talks ever. I like that Angel recognizes that. And that she still thinks he’s crazy.

I’m just loving this comic book so much. These are exactly all the things that I love about Angel’s world wrapped up in a book. So happy.

On that list is that Gage finally made vampires being able to make bites pleasurable canon is for the win. Yep, tropes that people put more in fanfic then canon, now canon.

I also adore watching Angel overcome becoming a vampire. This falls so much in line for who he is and what he’s been though. Plus, Connor’s there, which we all know makes him more balanced. Unless Connor’s going crazy himself that is.

I rather wish that Gage would write a comic with Angel spending time in LA, like he says he’s going to at the end. However, I have a feeling that we’ll be back in London by issue #14. Especially since the other Slayers have found out that Faith’s been working with Angel. That’s never good.

Yeah, I wasn’t a big fan of this issue. Mostly as I don’t care at all for Whistler’s backstory nor that of Nash and Pearl.

Whistler’s backstory didn’t need to be it’s own segment in the book. There really wasn’t that much to tell in the end. Seriously, he likes balance because he’s part demon and part higher power. Plus, I don’t think this mythology fits that well in the Buffyverse. I’m sure Whedon signed off on it or whatever. But Angel hasn’t exactly had the best run ins with the supposed “Powers That Be” so I just don’t see him really buying Whistler’s whole plea for good guy.

I’m kind of sick of these demon birth plots. At least, Pearl and Nash’s mom wasn’t raped by the demon. I guess that’s one plus in this story. But then that Pearl’s and Nash’s pain comes from how their own children, born of breeding with other demons (I’m kind of surprise they didn’t add incest), were slaughtered is just lazy storytelling. Give me something different.

Figure out how you like Angel’s adventures, buy Angel & Faith Volume 3: Family Reunion