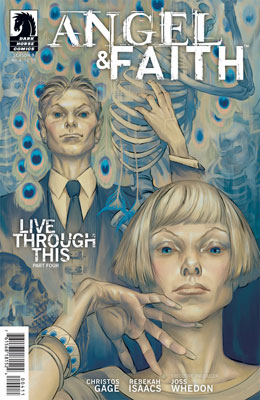 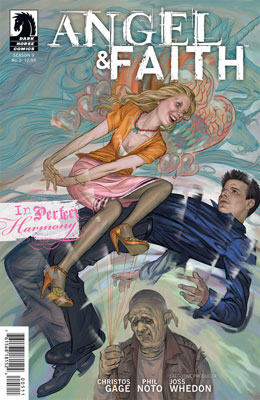 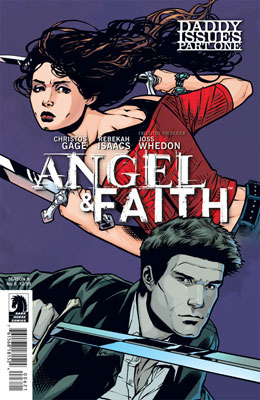 This was the first one I didn’t find very entertaining. Maybe I just really don’t like Pearl and Nash. They’re just so boring. Like what’s their angle? Who are they besides “we’re evil, let’s kill things” and for some reason they’re listening to Whistler. Which also makes zero sense.

The whole tumor people seemed pulled right out of Deadpool. Figures that Angel would kill them by chopping their heads off and that the lack of magic would’ve messed them up. Good thing Faith didn’t dump the goo on Angel.

Okay, that ending was just weird. Does this mean Giles did some weird spell that made him share part of Angel’s brain? (Also that whole thing about vampires not having 20/20 vision is stupid. One reason not to be a vampire.) Is this like Star Trek III: The Search for Spock? Is Angel McCoy?

This was an awesome issue. Harmony is the best. Or the worst, which makes for such a great comic. I love how much she’s played as a foil to Angel in this issue. She’s famous; he’s infamous. She inspires other vampires to be ethical; whereas, arguably, the only reason that Angel is good is because a soul was forced on him. (I’ve always wondered why Willow just didn’t do a huge spell to give all vampires back their souls. Of course, then you’d probably have a mass vampire suicide over guilt.)

The one thing I don’t believe is that Angel knows the names of all his victims. Yes, the ones he tortured, I can believe he knows their names. Whereas, the ones Harmony seduced for a snack, she probably doesn’t remember. However, Angelus definitely did a few massacres in his lifetime, which probably didn’t include asking them for their names.

Heck, Faith probably only knows the names of the people she murdered because she was brought up on trial for the murders. At least the justice system is helpful for one thing.

Clem’s crush and blackmail was kind of creepy. Of course, Harmony also has the memory of a goldfish.

OMG, I am so excited that Drusilla is back. I love her and the twist that she’s sane now. (Obviously, that has something to do with the crazy-making demon.) I just love when she’s all dirty toward Angel. Plus, the whole new ‘don’t eat people’ rule just doesn’t fit with the type of vampire Angelus trained Drusilla to be.

I’m also glad that Isaacs is back. Hopefully, she continues on this title. Even if her Angel has a tad bit too large of a forehead, I do love how she draw soulfully, thoughtful Angel expressions.

The shout-out to Douglas Adams was cute. But Angel’s always struck me as either a fan of the classics or of detective or western fiction. Somehow I think there’s enough weirdness in his life that sci-fi may be too much. Though I do like the metaphor of him identifying with Arthur Dent.

The back-story about Giles and his Watcher-training and what led him to escape it was perfected. Loved it. The contrast between Giles and his father was great.

I’m also really interested to see where this storyline with Faith’s father goes. Mostly because this title’s been largely about Angel, so it’d be nice to find out what direction Faith’s going in.