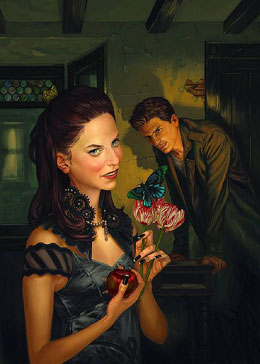 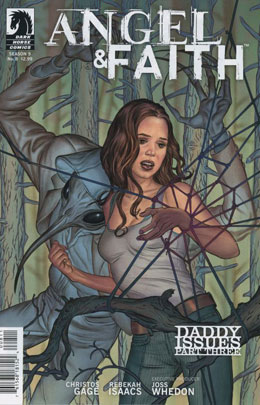 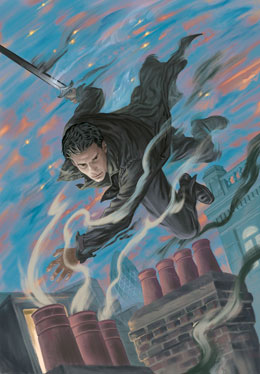 Drusilla has never been my favorite character; but having her sane is a more interesting twist on her than perhaps other stories. Though her “helping the helpless” like Angel is perhaps too much of a literal dichotomy to compare against Angel.

I love how everyone thinks that raising Giles from the dead is a dumb idea. Even Drusilla. Personally, I’m not a big fan of the whole Angelus as literally another voice in Angel’s head. I’m more on the vampires have strong urges to kill and hunt, even if they have souls, train. What makes Angel the multiple personality having vampire anyway? Like wouldn’t Spike be that way too? (Except for that short time in the basement…)

I wish Gage hadn’t relied so much on the TV show for inspiration to the flashbacks. Give me something new; that’s why I bought this comic book after all. Or a slightly different perspective at least.

On the other hand, I love that Isaacs drew a random person wearing a Jayne hat in the background art. Win.

Of course, Faith’s dad isn’t there because he’s her dad. I feel like a lot of writers seem to miss some of the things that made BtVS and AtS so great. It was that sometimes someone’s parents were just their parents (see Fred) and sometimes your mom dated killer robots (“Ted”). I feel like Faith could learn a better lesson by just interacting with her dad. Not him working for someone who wants something from Giles’ flat.

I can’t buy Faith just giving up. Someone who spent a lot of time in prison, who did her whole arc which included a suicide routine. Especially since Angel’s still hellbent on it, and her whole bond with Angel is supposed to be him as inspiration for her own path to redemption. Was I the only one watching this show? (Note: This is why I avoid Whedon-based products. I get into crazy town fangirl mode.)

I also can’t believe that Faith hasn’t ever accidentally hurt anyone who’s human in the book before. Yes, there’s the factor of her father being there and digging into all those old memories, but still.

This series just seems to be traveling down a road that has no interest. And I’m going to sit here and ponder who’s pulling the strings and if they’re trying to make some tie-in to the BtVs comics or what have you. Also so bored with the Irish mob.

The ending of this arc felt rather unsatisfactory. Perhaps because everyone was back where they started as if no lessons were learned.

Okay, Faith’s now on-board with Angel’s bring back Giles plan. Which is stupid, but stupid in that special Angel way. Just like his dumb new piercing. (Since he only has so many nipples, where’s he going to put the other pieces of Giles?)

I don’t like that Drusilla’s all crazy again. Even if she may have still wanted to be crazy. But I do enjoy that the crazy lady is like “I’m going to get a million miles away from you, Angel.”

I wish Faith had stood up to her father more than just having Angel threaten him like that. Though again, very Angel. He is a little overprotective and all cave-man like that.

Evaluate it for yourself, buy Angel & Faith Volume 2: Daddy Issues