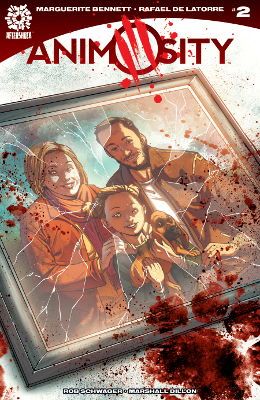 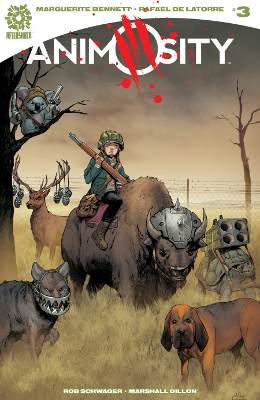 This book is easy for me to like: it’s about animals. It’s specifically about animals becoming conscious of how humans treat them and reacting toward that. It’s easy because of Jesse and Sandor’s relationship, which I assume will be challenged as the book continues. It’s easy because I love my pets, both present and past, and because I’m a sucker for all types of animals.

Adam and Biel do make for a cute start that becomes rather deadly… Or at least infectious.

I loved the splash panels of the different types of animals as they became fully conscious and aware. It serves to answer many questions about the awareness. It works on a lot of different levels. Though I do wonder what polar bears will eat, if they’ve now decided not to eat other animals. Same with cats. Though that tiger wasn’t going to hesitate to kill Sandor, who she saw as a traitor.

The cover does remind me a lot of the White God film poster. (Which I couldn’t watch as the girl was getting separated from her beloved dog by her mean dad, and it was breaking my heart too much.)

I suppose like every fairy tale, the girl’s parents must be brutally murdered. But wow, I didn’t expect her father to go out having a panic attack about Sandor’s loyalties to Jesse. I mean, at some point, Jesse will grow big enough that she’ll become an adult and there will be issues.

The world seems a little inconsistent on if it’s safe or not. The scene in the park served to set up more dialog about the lives of others in this story (beyond Jesse and her family). Jesse’s mom and Sandor buying Jesse the stuffed horse was sweet. However, the park also seemed much more genial and calmer than the sewer hiding out, the bombing, and Jesse and Sandor’s final scene leaving the city. I do hope it was a small flaw as this is one of Bennett’s tonal weak points in her other books (Bombshells and Insexts).

I can’t wait to see what Adam is up to. Especially since vets will, no doubt, be a highly in demand skill. I’d also like some addressing of meat-eating animals. As I mentioned above, animals like cats have evolved to only eat meat. Digestive evolution has not changed overnight.

I’m looking forward to more clever animal illustrations from De Latorre. I loved his moose with squirrels with guns hanging out in its antlers. It will continue to be interesting to see animals adopted technology.

The one thing I don’t really care a lot about is how the animals woke up. I do hope this book doesn’t care much about how it happened because that seems to be looking at the past.

Okay, I knew I shouldn’t have written that part about not really wanting Bennett to explore why the virus happened. Because that’s clearly happening. Even if Sandor claims that he also doesn’t care. At least someone’s on my side.

$20 says Adam is at the heart of the discovery about how to turn animals back to their original state. Though there’s also a possibility that the humans straight up lobotomized that dog.

The hipster guy was pretty funny. It was a treat to see Bennett’s notes about his design in the back of the book. Explains a lot about how he would be okay wearing the shackles.

Bee the Bison was great. Same with Jesse knowing she wasn’t a buffalo. Loved the Pallas Cat as well, who’s nonbinary. The interaction between them and Jesse around pronouns was excellent.

It’s interesting to see how the animals have come together. And how the humans made fake meat that they all can actually eat. (The thing about tofu and such is that it may work for humans and omnivores, but who knows about cats and other carnivores. And how do they get it to the sharks?)

The Humpback Whale giving Jesse and Sandor a ride was a nice touch.