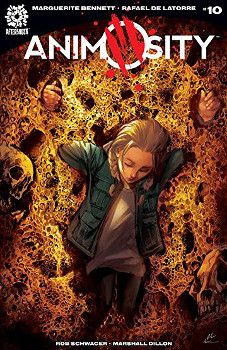 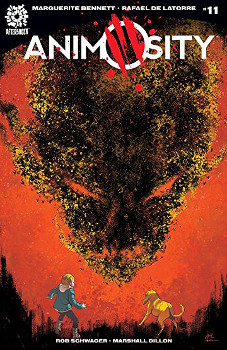 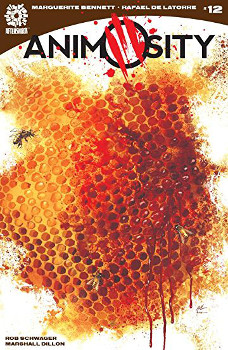 I cannot get out of my head this line from Jesse:

“My mother says — said — if you’re a girl, and you go into a place, and there’s no other women there, you need to be careful, or else just leave.”

And how Jesse notices all the wedding photos and that girls dresses make up the bedding. It is unnerving.

I’m betting the women are the sacrifices to whatever they are scared of in the forest. Though it does seem rather dumb if you want to continue or grow the population.

Curious to see how they tie back in the story about Jesse’s mom Shannon’s depression and suicide attempt. Sandor is a good dog. Such a good dog. I love how Mitten’s human Marilyn responded to saving Shannon with a nonsense attitude about acknowledging what happened, but also with lots of compassion.

Seems like we could use some Marilyn right now.

I also want to know if this was the plan all along. Did Kyle “betray” Jesse on purpose? Or did he really think this was the best course of action? Especially since he was the one who dug the hole? Did I miss something?

I also don’t know how Mittens is a hostage. Seriously, the cat could scratch Jesse and get away. Unless Mittens is also ready to get the heck out of this place.

It is interesting to think about the value of lives and how our world in general treats the little creatures. It does say a lot about how harsh these men are that they would kill a sentient creature without any regard or regrets. This book continues to ask these questions, and I’m not sure if we have answers. Jesse may be an ethical benchmark, but we also know that she’s not fully aware of everything. Such as she still eats meat.

Kyle was faking it? This was the plan? This whole plan was a very bad plan.

Mittens. Never let your hostage run off, Jesse. That cat is going to cause some damage.

I get a lot of bees are going to die in the bee war. But seriously, can’t we compromise? Also, I think the bees would win out since any human stung by lots of bees would die. Though I suppose they may also want to die too.

Why would the queen bee lead the charge? That seems extra dumb.

Of course, Pallas just has a lei of flowers around their neck. Pallas is the best.

I did not pick up that Sandor got the pills for Shannon. Did I miss that? Or were we not shown that? It’s obvious that Sandor believes he knows what’s best for Jesse and that he could raise her better than her parents, but I’m a little confused.

I continue to dislike how short these issues are.