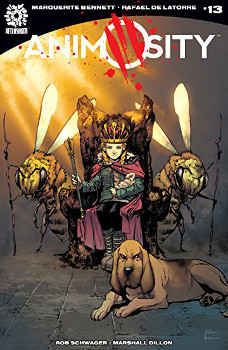 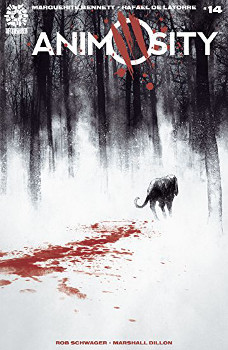 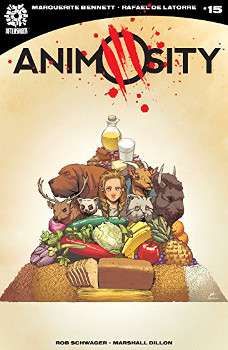 Considering Kyle hasn’t been a complete tool this entire time, what is up with this city? It is controlled by sirens? Does Kyle just actually believe in a matriarchy over the animals? I mean, this is the same guy who let himself be chained up multiple times, so maybe he’s just looking to hook up with a domme.

I still rather don’t understand why both the farmers and the bees were content to murder each other. I suppose this a Prisoner’s Dilemma at its core, and the belief in a zero sum game, which is apparently even hard for American animals to shake.

Sandor isn’t going to rest until he finds Jesse. Everyone should know this about him.

The other animals we care about seemed in better shape than I thought they would be. Though Sandor isn’t hesitating to draw attention to himself. And maybe play on some of those rumors (or truths) about his viciousness. We still don’t really know what Mittens thinks he saw.

Seems like Kyle is destined to die. If his leg’s infected and he’s been shot, his chances of survival are slim. It’s not like they have state-of-the-art hospitals. I do imagine that many of the other humans feel the same way about the animals taking over the world. I do think he’s an interesting contrast to Adam.

It was very clear immediately that the Walled City was all about breeding humans. And as the scene with the tampons points to, Jesse has reached puberty.

While it’s interesting to see the narrative take Sandor’s sanity into account, I’m not sure if the narrative is strong enough to totally break down who the heroes are. Though we have since the beginning questioned if Sandor killed Jesse’s parents. And what she will do without him, especially if they don’t make it to Adam. Which is a long bet.

I am glad Zarza is alive (I was worried for a moment) and that the other animals are okay. A Walled City is certainly harder to break into it. I get how the wall protects them, but I don’t really understand how they can keep out animals like insects or rats.

Yes, I’m sure a lot of humans died in the Wake, but there were so many humans to start with, I cannot actually believe there’s a crisis and need to breed. Though certain segments of white people always think they need to breed.

Kyle. Jesus, what a story. And not one that I was expecting. Well, I did expect the part where he passed himself off as multiple ethnicities to scrap by and get work. But he had to be smart as he had to learn several languages and that in itself is quite a skill.

Why do the animals all speak English? And if we can understand animals talking in their own way, does that mean that humans who speak other languages can now all understand each other? Or do only animals in America speak English? Or like Zarza also speak Spanish because of the humans he was around? Now I have more questions.

The one angle I found interesting in Kyle’s story is how much him being human prevented him from being completely thrown away and taken out back and shot — which is what happens to him at the end. Instead, people have to put up with him due to human superiority over animals. But when they all become somewhat on the same level, he’s dragged out and killed. No wonder he ran to the animals first.