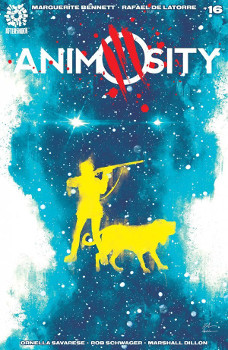 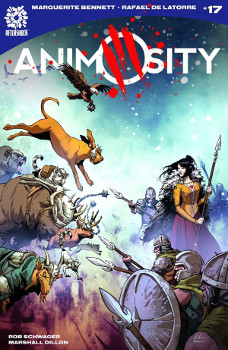 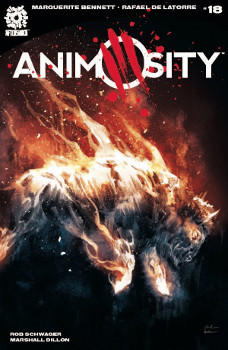 Okay, I’m not sure how it’s been so many issues, and Kyle’s still alive. They shot him in issue #13! The pacing here is terrible, and it seems like Bennett’s unsure about where to go with this plot. How do you get Jesse out of this city?

I mean, it’s all leading up to Sandor’s death. I suppose he could sacrifice himself here.

Yeah, anytime you are trying to control cis women and their fertility, it’s going to get creepy. Jesse is going to find herself pregnant sooner rather than later as pregnancy’s used as a punishment. Though with all the talk around how hard it is to find resources, I again don’t understand this, “we need to breed more humans!”

I’m surprised this storyline isn’t more creepy than it is. I feel like Jesse has only seen the surface level troubles that are going on.

If Jesse does shoot and kill the headmistress, then I guess Sandor really did raise his daughter to be like him. I do want to know what the girl told Jesse about the reason why they cannot leave. It only made her more pissed.

The bear turning on them was heartbreaking.

No one is surprised Sandor killed Kyle. He was also going to die anyway. I do want to know exactly what happened to Jesse’s parents, but most of the time, I think we are never going to find out.

My main beef with these books continues to be that the issues are too small. They don’t have a lot of room for the story to advance in each floppy. They feel like webisodes compared to full 30-60 minute TV shows.

It’s not surprising that there was a breeding basement where those with wombs were knocked out, and their bodies used to make babies. Also, that some of the men — complicit in all this — deluded themselves into thinking their mothers, sisters, and aunts had just run away.

As someone who could theoretically bare children, this nightmare scenario is a nightmare. I don’t find it a very clever plot-twist, and a seemingly obvious one in any post-apocalyptic world where perceived lack of babies threatens human survival.

In the end, Sandor’s daughter doesn’t kill the headmistress, because others will do so. Others with far more rage against her. And those wild hogs will take care of any traitors.

What those surviving humans will do, especially with so many babies, we don’t know. That’s the kind of questions that Sandor’s and Jesse’s continued leaving never gives us answers. There aren’t any long-term solutions, and in the last several situations, our heroes have left the place on fire.