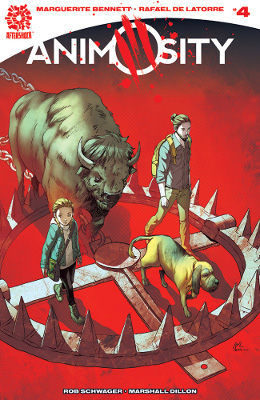 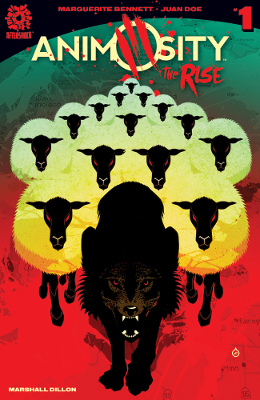 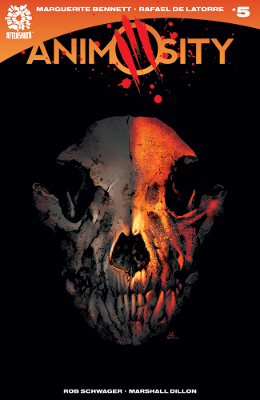 I wish these issues were longer. AfterShock keeps putting huge ads for its other comics in the back of each issue. I want more Animosity, not less. I also feel like if I got more story, these issues would move from four to five stars.

I figured that there would be a battle. Mimico was ready to fight for Pearl, and he’s even more upset when she comes back without her mind. It was a nice twist that it was actually the other animals, who were planning a mutiny, that injured Pearl, not the humans trying to change her back into a “mindless” animal.

I kind of adore this menagerie of animals and a couple humans who branched off with Sandor and Jesse. It’d make sense that they’d need more creatures in their life. Can’t wait to see how their personalities and stories play out.

Even though this issue was supposed to be about what happened to Joe since we last saw him at the beginning of the animals getting consciousness, it really is the issue which is most about the journey of the animals.

They’ve completely taken over San Francisco, which isn’t surprising to me. Anyplace with that much wildlife around, not to mention pets and rats, and water is going to have a lot of animals.

While I was not a huge fan of Doe’s art, that vampire bat was terrifying. Yes, it was supposed to be so as Joe’s keeper, but wow, just a little scary.

I enjoyed the continued exploration of animals and their loyalties and decisions about each other. Especially in the predator / prey context. I did enjoy that they are talking about building devices that make it easier for them to function in the world. However, you’d think they’d also want to adjust human technology to be animal accessible. Though I, for sure, understand why they might want opposable thumbs.

If the lights are back on in San Francisco, I want to know more about the internet. How’s that working? And what about other cities? So many questions, so few issues.

Trying to figure out the marketing strategy of putting 20 pages of story and 20 pages of advertisements in one book. Okay, Aftershock. It did make me count the pages to make sure I wasn’t getting shorted on story.

I do like how complex the world gets due to the animals being awakened. I love the conversation between the shrimps about the urchins and bacteria, and then how they are passively consumed by the whale. Then the further conversation about how insects are fairing.

I also appreciated the part where they talked about how sick the kola must’ve been due to what it was supposed to eat compared to what it was eating.

The whale’s wisdom about life was harrowing. Harrowing because it’s too true for those who live so long and for what humans have done to this planet.

Now I really want to know if there are dragons and if they were just really good at hiding. Or if someone was building a Jurassic Park like theme park, only with dragons, and that’s how the animals awoke and that’s how we have dragons.

The scene where Jesse gets her first period was really well done. It fit into the narrative perfectly, and into the yep, this is what happens to young girls. Jesse is growing up. Beth is the best.