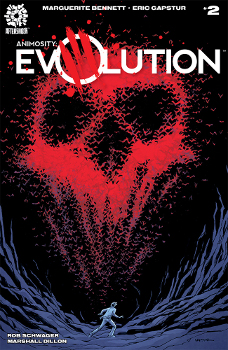 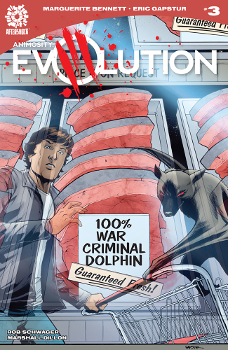 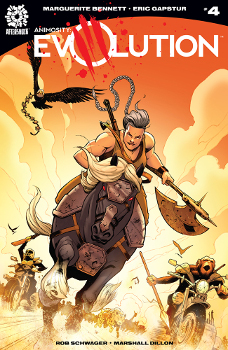 It’s been odd to see how Bennett writes around Wintermute currently. Instead of writing directly about Wintermute and their rule we get everyone else’s perspectives.

I immediately want to know more about Gwen. It’s nice to see a butch lady hero kicking butt and saving animals. We don’t have many of those in any type of media. Yes, I know this story doesn’t say she’s queer, but hair AND this is a book by Bennett, who is a queer writer.

Augusta, Julia, Octavia, and Septicemia are too cute, and they are funny. Bennett does a good job at laying down humor here. In a way, these newly literate mice as like high school students who think they are incredibly smart as they just read Shakespeare for the first time.

Penelope the cow is so sweet in giving them a place to cuddle. Octavia’s glasses are likewise cute, along with the idea of them now having to churn out a bunch of glasses for all different types of animals. As a glasses wearer, the struggle is real.

Mya seems too good to be true. Though there’s some nice background work about a black market happening, and how despite everyone going through quarantine, it’s impossible to catch everyone, particularly if they have wings.

The mice seem to not have bad lives, until Mya gets them almost eaten — or eaten before they are rescued — by a giant snake. Though I do wonder why Adam would be out on such a potentially dangerous mission when he’s so valuable.

I must’ve missed the part where Adam gives Wintermute the revolutionary note, which was really a loyalty test for him from Wintermute and Keekirikee. I saw the initial note giving, but the not the end of the loyalty test. Did I accidentally skip a page?

Is Octavia going for some Miss Marple? Of course, there’s a thriving black market. Where there’s an unfulfilled need, there will be a black market.

Interesting to hear how the cows view their milk, and how they believe they should be allowed to sell it instead of giving it away due to their past situations. I like this as an angle that shows how humans have a hard time with sharing and concepts of fairness.

These animals and humans are essentially trying to rebuild a society, but what they seem to be missing is a community and common identity. Yes, they how the Awakening in common, but what else? How does Wintermute bring them together? Doesn’t seem like these mechanical parts would do anything but cause further riffs in the community.

Gapstur does a great job at showing just how giant Keekirikee is here. Especially compared to Maya. There’s a reason why Keekirikee is assigned to Adam, and it’s not just because they don’t fully trust humans. In fact, with Adam, it’s almost the opposite.

The poison dart frog was definitely not after Maya. I hadn’t thought about creatures like the dart frog, but yet another layer of trouble added on.

No one is shocked that our mob boss turtle has a mechanical adaptation.

Are Wintermute and Adam going to have a romance? Is that what I see happening? I mean, I guess if we’re going to go there, the animals can now consent to romance and sexual relationships. I suppose I should’ve guessed that this book would go there, and also because Bennett loves romance and secretly writes romance books in all her titles.

I thought Octavia was ballsy, but then, so are her sisters. These are not some shy country mice; these are desert born Furiosas.

The dolphin meat is indeed a curiosity. But Octavia is a little too Angela Lansbury in just introducing herself as the goodie who will solve everything. It’s also possible that Wintermute is behind the black market, or at least controlling it somehow.

I am interesting in learning more about Gwendolyn and the Raiders. Of course, I’m most interested in how Gwendolyn maintains her undercut. Though I suppose if every animal must have a job… Which I appreciate this book addressing things like capitalism, how the old system cannot be the new system, and how you cannot decide whether or not to take care of someone based on their working “worth.”