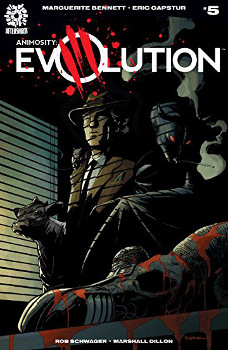 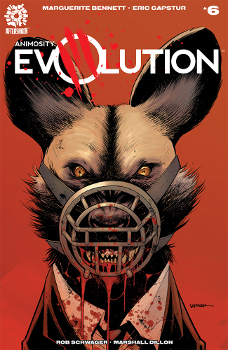 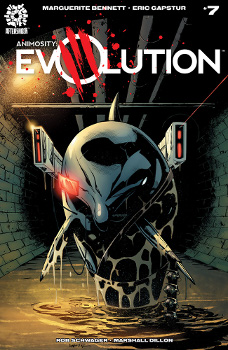 An explosion isn’t going to stop Wintermute. I feel as if the Leopard should know this. I mean, I don’t know what’s going to happen next. Though I do imagine that Adam will put two-and-two that all the Animata are under attack.

That said, I do wonder what the entire point of this is. We’re really just getting to know the Animata, especially since we see Goliath’s entire journey into Animata and the Animata loyalty pledge. Maybe that was the point.

The Leopard is very right that Wintermute knows about the black market, and in some ways, she must be okay with it. I don’t know about the fresh meat angle, but again, not all animals can actually be vegetarians and survive.

Oh, the rat sisters. I thought they were mice in previous reviews. I kind of adore how Bennett is giving them such different personalities from each other.

This is one of those, welp, let’s see what happens next issue. The destruction isn’t the interesting part, but the aftermath is.

I rather felt that this issue was unnecessarily violent. For instance, I understand why Adam was leading the investigation since he has Wintermute’s trust; however, again, if he’s your only vet, you are going to protect him more. Where was Keekirikee in this scene?

Penelope and Octavia are now in even more over their heads. They seemingly have no choice, but to become part of the black market. Which maybe that was Leopard’s whole entire angle.

I didn’t realize Wintermute was female. (Or did I?) I guess that takes out the romantic plot. Which I’m kind of glad about. Of course, Wintermute was able to survive and Adam ran to her knowing he’d still need to fix her.

Leila never should’ve confronted Viktor in that kind of public setting with a protesting crowd behind him. I was rather excited to see Leila hit him over the head and knock him out.

I have no clue where this book is even going. Like is there a civil war? Why are the dolphins on the side of the Leopard? Which characters are we supposed to care about?

The best part of the book was the banter about killing Viktor. I would’ve killed that guy sooner.

Leila and her cat are very much in trouble. Seems like she should be freaking out a little more. Though also maybe she just wants to see her ex die. That could be a strong temptation.

This cyborg Wintermute kissing Adam is real weird. I cannot tell if it’s some tech Wintermute hooked up Adam to, or if it was all in Adam’s head. It wasn’t even sexy or romantic in any way, which is kind of my biggest problem with the entire scene. I want more connection between the two of them. I want more characterization here and more getting to know our characters.

Not just civil war and unrest.