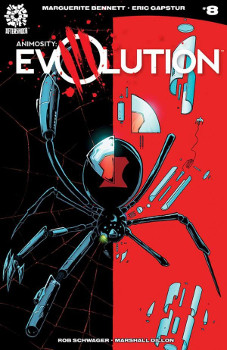 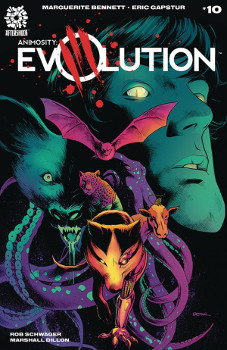 This issue had way too much dialog and not enough movement and action until the very end. The more of Animosity I read, the more it’s clear Bennett leans heavily into the “leave them with a cliffhanger” or other issue ending shocker.

I am curious about the Ur-king calling Wintermute sister. I mean, also one day we’re going to regret how we’ve treated cephalopods, no matter if there’s an all-animal waking or not. Since cephalopods have very different DNA, I’m in the camp that they are from another world, and we just don’t understand how they communicate. This is what I think anytime anyone around me eats them.

The flashbacks didn’t work for me since we also just covered a lot of that ground. I didn’t need to see Adam piece everything together in order to make sense of the story. I don’t know why he’s surprised that Wintermute is well Wintermute, despite the kissing.

Ummm…what happened. I still think I’m not getting it. Or maybe I am getting it and the plot just isn’t as clever as I thought it would be.

What happened with the Ur-king? That plot was dropped like a hot potato once Wintermute was arrested for her crimes. Her crimes of letting there be criminals.

What I don’t understand is the weird romance between Adam and Wintermute. Or how exactly society will continue to run without someone to lead them, especially since it’s not like there was a democracy set up again and there’s just a few complicated dynamics in the city. And a food shortage.

When the story is small in Animosity, this world works okay, but when we’re talking about systems, Bennett is not a systems writer.

Hello, deus ex machina. It wasn’t a kiss. It wasn’t love. But Adam is the first human Animata, and he conveniently has all of Wintermute’s memories, thoughts, plans, and intentions. Ain’t this a tight and tidy package.

Except at the same time, it’s very messy. It is not neat. There is still the Leopard, who believes himself to be in charge. Who wants to kill people and cannot see any kind of alternative solution to their problems.

No one is sad that Viktor is dead. No one.

And now everyone is going to be a rebel? And somehow the main title will meet up with this one? Okay.