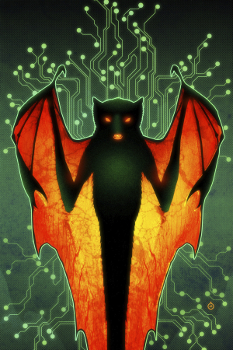 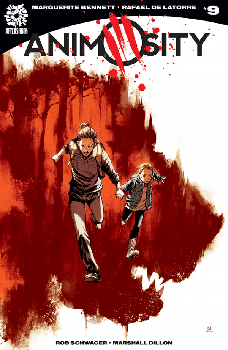 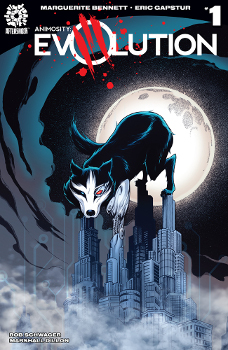 More than anything, The Rise feels like a book about a revolution tearing down the fucked up ways society operated, only to have them realize they didn’t have a plan in place. And now people and animals are dying. Or disease is going to spread from the dead bodies.

Keekirikee may be the best character. A bat brushing her teeth was pretty hilarious. I love how she’s actually part of a resistance cell, but then is like “I’m not going to stop being a dick to you, Adam.”

If Wintermute is claiming to be above his animal nature, he sure has that boardroom mentality. Also, there seems to be so few animals around him.

Who knows if Adam will go for this? And who knows what the consequences will be? Especially if his sister actually shows up.

You’d think that Mittens would’ve gotten rid of her slave name. Also Mittens is just a terrible name. Though clearly, something is up. This is clue number one.

de Latorre’s art is very lovely here, when showing off the valley. His creative choices to show the bees also were a standout to me.

However, I do feel some adventure fatigue with the bees demanding that Jesse and company find their queen. Does everyone have to be kind of evil? (Also stealing bees is pretty low even when they couldn’t talk.)

Zora teaching Jesse Spanish was cute. I also liked the joke they made about Zora’s clothing.

This issue was a bit disappointing between the adventure fatigue and the lack of dealing with the reveal of Sandor dying and how it being out in the open affects everyone, now that Jesse knows they know she knows.

My one complaint about these AfterShock books is that they are never long enough. I want more. Especially considering they are just as expensive as other comics. (Even if they are printed on nicer paper than most other comics, and there’s a true heft to them.)

I am a tad confused at where we are in the timeline. I believe this is supposed to be before the second issue of The Rise? That would make the most sense since Adam isn’t contemplating leaving or rebelling against Wintermute.

If anything, in this issue, Adam’s commitment to Wintermute, Wintermute’s vision, and Wintermute’s ability to keep San Francisco somewhat peaceful seems clear.

Of course, it was a dog owned by a rich techbro, who was sick of pulling garbage, that tried to blow up Wintermute on an impulsive suicide mission. Some creatures just can’t handle slightly roughing it. Apparently, his owner’s entitlement rubbed off on him.

Though that’s some crazy tech that saves Wintermute’s life.

I liked the touches with the bear mother and Makala and Charlie were nice ways to see things differently. Especially when Makala kisses Charlie on the cheek. Same with the mayflies and their thousands of generations since the Wake, and even the Seabirds and their generational legacies. More great touches by Bennett.