This is the only Birds of Prey issue not to show up in the trades and I’ve spent a while trying to find it. I figured that it might take place during the Crisis. But nope. For all my searching, I think this comic is mostly filler, and it’s not great filler at that.

Written not by Simone (who was the writer on BoP at the time), it has Jim Alexander as a guest writer, along with guest artists. The writing is just bland and Barbara’s characterization just seems to be a little off. Yes, she keeps secrets from her team, but there just seems to be gap. The story tries to be too cute and too much of a telling, rather than showing, of Helena’s conflicted feelings about mobsters and killing them, if killing them just means she doesn’t save them from impending death. Then it ends in really weird art showing an evolution of Huntress, mostly in costume, with one of them looking like a prepubescent boy. Frankly, the whole thing is rather weird. 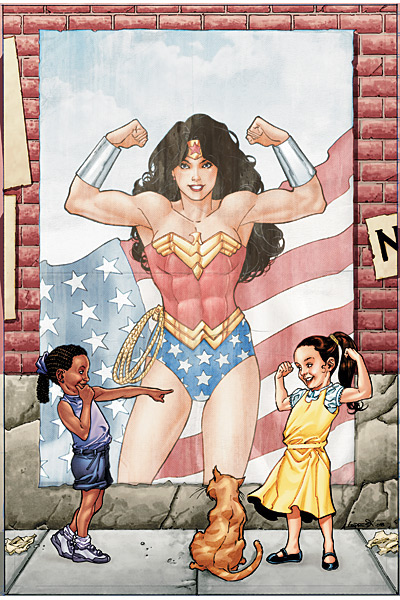 I love the cover art on this conclusion to why there’s not a Wonder Woman movie issues. In this the director turns out to be a fable, specifically the Wicked Witch who sees Wonder Woman as Snow White and wants to kill her.

While the story is not particularly invigorating into the mythology, I did enjoy the poking it gives to Joss Whedon about failing to direct a Wonder Woman move and how Simone continues to explore the reasons why Wonder Woman should make a great role model for women.

The best scene is the end when Wonder Woman meets up with Allison again. Wonder Woman has become not only a role model for Allison’s two daughters, but for Allison herself. Plus, Simone gives more set up for Hippolyta’s order for Diana and Tom to have children.

Another end of a plot, Iron Man takes down Ezekiel Stane and his Iron Man suicide bombers, which are all around the world in Stark facilities. Of course, Tony Stark did not die in the last issue. Fraction’s is not quite ready to pull off killing his main title character and keeping the title going a la Brubaker yet.

While sometimes I find this universe confusing as a Marvel reader, I do think it works well in bringing the fan of the movie into the Marvel universe. It’s all about the baby steps. (Even if readers will wonder why the heck Samuel L. Jackson is head of S.H.I.E.L.D. in the Avengers movie. Because he’s that mother%$#@!&$# cool.) It’s also what I would term a very realistic comic.

Stark stops Ezekiel by sacrificing himself (to some extend) and shows sorrow when they can’t save the suicide bombers. While I’m not intrigued by the Spider-Man preview for next issue, I am curious to where this title is going with Pepper’s character. 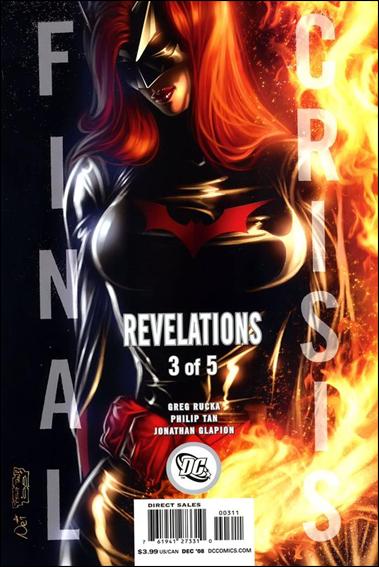 I love Rucka’s writing and I love the Question. I’m the fangirl who wants to know when Rene is going to get her own series, a good and proper one, not just these minis. However, this whole Crime Bible cult has me scratching my head and re-reading a lot of the time. And I had enough of Christian schooling to know my Biblical references.

I like how it’s bringing almost all the elements of Renee’s life together and how free will is shown as life vs. anti-life of the brainwashed. However, when all the anti-life shows up in Gotham, I can’t help but wonder, where’s Batman in all this? It is “his city” as he tells fellow superheroes and the cast of villains all the freaking time.

My favorite part was when Mercy could not forgive her murders. It really made a stand-up for free will and that she still had it, when both the Specter and Renee had questioned if she didn’t follow whatever “God” said.

Also, I love the full-size covers on this. The Batwoman one is just beautiful. (Well, her boobs are a little too large.) I love the color and the light.

I really the Invaders and moreover, I love Steve Rogers as Captain America, so I was really intrigued to pick up this Alex Ross title. It’s a little Secret Invasion and a little Captain America with a giant What If… thrown in there for fun. However, Ross’ writing keeps coming off as slightly flat with predictable sadness and delight from all the characters as the Invaders run into “themselves” and the Avengers meet the Invaders post-Rogers’ death.

I Was Kidnapped by Lesbian Pirates From Outer Space!!! #3

I love this campy comic. It’s funny and, if you haven’t been able to tell from the title, has Lesbians, Pirates, and Outer Space. I love all three. In this one, the pirates crash down to a planet as their warp drive is busted after a harrowing escape after some bank robbing. Susie runs away when confronted by her lesbian feelings — the Gaydar detects all — and finds herself kidnapped.

Male Man is naked for most of the story (eww) and his assistant Betty proves to be cool as a cucumber. She takes a bubble bath while pretending to do his laundry as he has no idea how to do laundry and thus, no idea how long laundry takes. FTW. Support your independent comics.