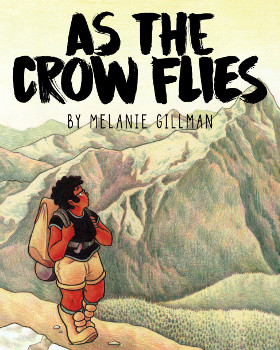 As the Crow Flies by Melanie Gillman

As the Crow Flies is a beautiful narrative about a young black queer girl Charlie, who goes to an all-girls and all-white Christian camp.

The camper’s mission is a hike up to a women’s only shine on Mt. Sanctuary, run by Bee and her daughter Penny. The hike is continually mentioned as a (straight, white) feminist act due to a town uprising from Beatrice Tillson, who established the shrine.

Gillman navigates Charlie’s universe through her introspection, her constant battle against microaggressions, and her own growth in coming of age. I felt for Charlie because I too have been at Christian camps like this, where I too didn’t fit the mold of who they were lifting up. And the added intersection of race — which as a young white girl I was pretty unaware of — just adds to the layers.

Yes, Charlie could call her parents, who’d come to pick her up in a heartbeat, but she’s also at the age where she’s trying to fit in and resigned to solve her own problems.

The inclusion of both counselor Penny — the other character of color — and fellow camper Sydney — who’s a trans girl — were smart to show Charlie isn’t alone. Because even if we think we’re alone in these struggles, we’re not. It also gives us different characters to bounce off emotions and experiences.

One of the best-navigated parts was swimming time. It exemplified how the girls are both under a lot of supervision and also left to their own devices in the woods. As long as they can keep up.

I loved Sydney explaining that skirts were her action wear and made her feel like she was ready for everything. And how Charlie’s boots weren’t quite right for the trip. Or how they together have to master getting water and purifying it.

The art is beautiful. Gillman understands how to young children act and react in their bodies, and does equal justice to the forest itself. There’s just enough of the scenery and greenery to show how hard this hike is for the children compared to the adults, and it’s all extremely age-appropriate.

My only quibble with this book is the same as many other people’s: this seems like volume one, and we’re not sure there’s going to be a volume two. Charlie still has unresolved feelings, and while I don’t need her to take on Bee and her ideology, there is some missing resolution.