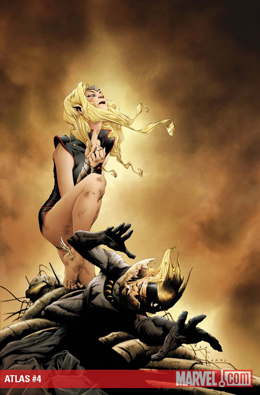 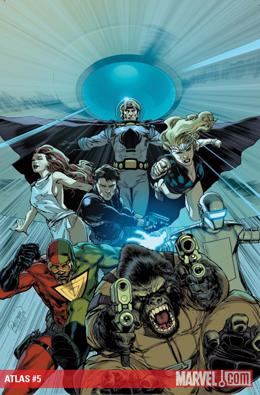 Now that is how you write a big fight in your secret headquarters. You bring in the big dragon, and Mr. Lao kills everyone who’s possessed with his fire. While Jimmy’s rightfully angry at him, there really wasn’t any other way to stop the attack and figure things out.

However, I rather wished that the teams’ women weren’t the ones both hurt in the battle. I get that, all things considered, they are arguably the two most powerful beings on the team, but still.

I love that since now everyone can see aliens as they truly are due to 3-D Man, Bob’s true face is revealed to all. While Bob is no longer human, I do think it wasn’t just for the comfort of his friends that he changed his look, but due to the comfort of what faces his friends might make when they saw his new face. Especially since they knew him before.

Since Parker killed many of Atlas’ minions, I’m glad that he highlight Chang and used him in a positive manner for the team. Thanks to Chang, they figure out which dimension the aliens are coming from and how better to stop them.

I’m not sure how enamored I am of them being lost in the second dimension. Obviously, not a lot is going to come forth from this plot since Atlas is canceled. In a way, it is a very “What If?” type of story. The one where Jimmy Woo ages, but founds and runs the Avengers. Of course, I don’t really understand why he ages considering if any character sticks around in main continuity, they don’t age. I mean, look at Nick Fury.

This makes me so sad. I hate that this book is ending. I hate that this team isn’t going to have a monthly book and that all their fates are up in the air when it comes to future publication. I’m going to need to take a moment to weep in my oatmeal.

Atlas has been one of my favorite books since I first ventured into their world during the second run. And I made sure to buy the book in single issue format so it would keep being printed. *sigh* I suppose my taste in books don’t run the world. But it should!

Sadly, I wasn’t as enamored with this Echo Worlder plotline as I felt that I should’ve been. But I have to give major props to Parker and the artists for so deftly wrapping up the plot in such a short space. Wow, that was a jam-packed issue. And even enough the plot might’ve not been my favorite, I still enjoyed it.

I always like how Parker tells more about the characters through their actions than exposition. They aren’t just stopping bad guys; they are also sharing about themselves. I’m glad that Bob has decided to share what he looks like with his friends. Venus’ reaction was just perfect.

M-11 breaking through the Echo World, and Jimmy figuring out what was actually going on to link the worlds together was just perfect.

The ending seemed bittersweet since I’ll miss this book so much. The whole team walking through a field to get back to their world had a nice touch to it. As did Jimmy’s talk with Khan. Same with Chang’s narration and Mr. Lao saying not to focus on him too much.