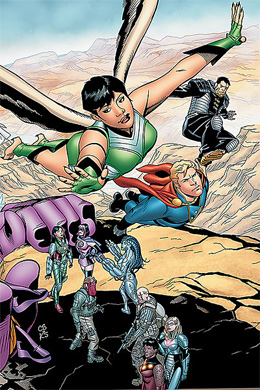 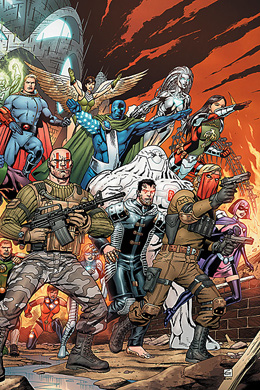 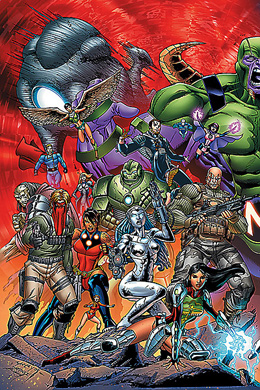 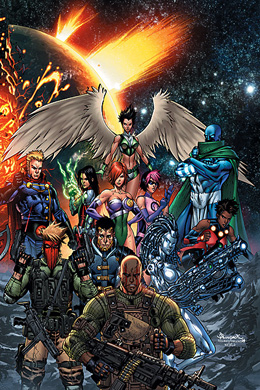 Unfortunately, I feel like the Authority‘s being written like a B movie on the Sci-Fi channel. The plot isn’t so great and hasn’t been for a while. Then there’s the generic evil techno-organic aliens that are eating the ship. This has been done before, a zillion times. And I realize there are only so many plots, I’m not seeing what makes this unique or even a good telling of this trope.

I’m hoping Taylor will redeem the plot with Jack’s involvement with its city. There could be some interesting things. Getting abducted and used by aliens definitely pushes Jack’s button. There’s no way he’s letting himself be used again.

I’m glad that River managed to save Swift from being sliced-and-diced. Now if only they could find her some pants.

Barrionuevo’s art is boring me. It seems very generic Wildstorm. I don’t know if there’s a company-style (hello, 1990s) or just who’s picking the talent. It all seems to look a lot alike and be rather generic. I wish they’d hire some artists who take a few risks or maybe let their current talent do so if they’re mandating a style.

I don’t know if this plot is going so quickly due to all the Wildstorm titles being canceled or if it has to do with the writers. Just everything seems to be falling far too quickly into place. They figure out too quickly how to get another baby universe for the Carrier.

The story of the planet and how the aliens became what they are today was vaguely interesting. But I think it’s supposed to draw some of my empathy on how it became so messed up. Or maybe serve as a cautionary tale for what humanity could become, you know, if we ruined our planet or something. But the writing just didn’t pull me in. Not even when River killed the giant brains.

I don’t know. This whole thing just feels like it’s returning the Authority to the status quo which it’s always been. So what was the point of this whole experience?

The Authority #28 by Tom Taylor and Adam Warren

As an end to the story about the Carrier, this was wholly unsatisfying. As the second to the last issue of the Authority before DC takes the Wildstorm titles under to be rebooted (again), this was also unsatisfying. Almost all these characters are ones I care about, ones I’ve spent at least four years reading about them and getting to know them. And I didn’t feel anything when the story ended and they escaped the planet.

I didn’t care. And I don’t think that I’ve cared what’s happened in these books since the High died.

I mean, I was worried for a bit about Shen — and missed her in the last battle as she’s such a brutal fighter — but I didn’t care the way I should’ve been. I never thought the team was in any real trouble.

Even with the exact same plot, I just felt like this story could’ve been way better executed, way better written. I needed that emotional impact that I just didn’t feel.

After I finished reading this issue — the final issue of The Authority under the Wildstorm imprint — I tweeted out about how this was the most fun an Authority comic book had been in a long time. But more of a bigger question of where has this fun been?

There’s no doubt that I kept reading this title out of loyalty. Because I love the characters. Because I am one of those sad fangirls who cares about her characters more than the crappy story they are starring in this month.

Ever since Abnett and Lanning went on to write for Marvel full-time, this title has been dragging. And ever since this whole World’s End thing, this comic book has been depressing. But it wasn’t until Authority #29 that I realized what had/has been really missing from this series ever since Ellis finished his initial run: the fun. (Brubaker was probably the only other Authority writer who even tried to make it fun.)

In this issue, all the characters were fun. I felt like the writer was having fun too. Just hanging out with the characters and wrapping up only a few loose ends.

How freaking happy did it make me that the High is back. That they found him and rescued him. Or the Carrier did. It also nicely go rid of the Karibna. Pretty good wrap up there. Plus, the reunion of River and the High was wonderful. <3s.

Additionally, I like that they made the Rainmaker pretty badass in these last couple issues.

Flint freaking out Grifter by saying she was pregnant made me laugh too.

In other final news, Shen becoming the new Doctor rocks my world. Yes. This is just awesome. She is amazing. And she deserves an awesome story AND PANTS. (Of course, my only beef is that the comics are ending and who knows what DC is going to be doing with these characters… And Shen still has no pants.)

I only wish that there would've been some meet up with the entire original team (or those members who are still alive). Yes, maybe I just miss Midnighter and Apollo. And Jenny.