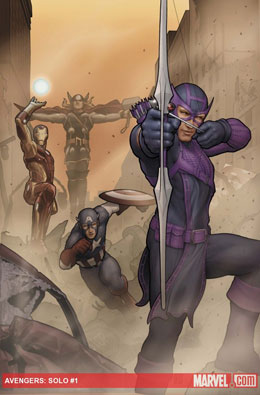 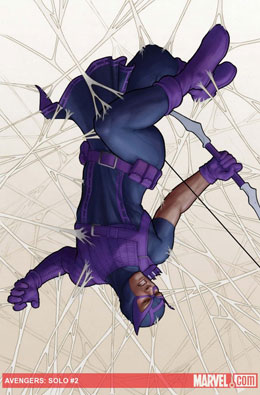 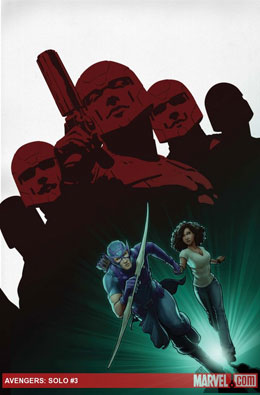 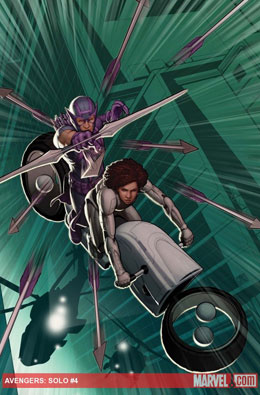 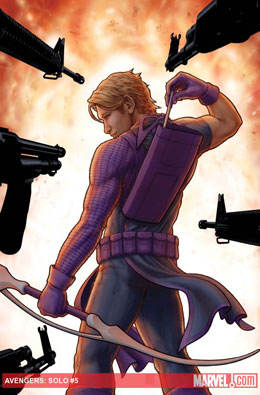 This title just didn’t grab me. Maybe it’s Hawkeye. Maybe it’s random attackers in suits that we don’t know who they are. Maybe it was just me having a hard time trying to pin down when this story is supposed to have taken place as it seems very pre-Dissembled. Or maybe that’s just because I haven’t been reading the main Avengers title since the Heroic Age launch. Or whatever.

I can say that I wasn’t grabbed by the mystery. Though I’m glad that the police assumed Hawkeye didn’t kill Tulio Guzman. Not very through on their parts, but cop-like. I wasn’t up for a rough Hawkeye story.

Robinson’s art left me a little cold. I can’t exactly pin as to why. But it wasn’t very compelling. The only time I got interested was when Martha Jones was clearly guesting from Doctor Who. I mean, Melanie. Of course, Martha would be solving this mystery on her own.

That said, I’ll keep reading to see where this goes.

I am just not feeling this story. I’m not sure why, but I kind of find it…slow and a bit convoluted. Which is sad considering generally I’m a big fan of what Van Meter writes. Perhaps it’s the focus on Hawkeye. Perhaps it’s the lack of Mockingbird attached to Hawkeye…

I know Robinson’s art is not favorite. It’s a bit too hard and too dark.

I’m going to keep reading this miniseries. I’ll see if it pans out, but right now, I’m not feeling it.

I felt that the story got a bit more coherent here. There was more backstory about the people that Clint’s helping. Alicia Guzman, Emi, Mel, and Jake are becoming characters that I might better recognize next issue.

Van Meter has Clint having the right balance of second guessing himself. I love that he never for a moment believes that Captain America is behind the secret labs. But at the same time, he thinks that something extra fishy is going on. And he thinks that Bobbi would be better at the secret detective stuff than he is. (I agree.)

The suit being able to work with more than one person was great.

I’m still interested to see how this plays out, and I’m glad that this issue was a bit more promising than the last.

I thought this issue had a lot more heart in it than the other issues. The smash-and-chase at the beginning was a little blah. Perhaps I’m looking for more of a spy story here and less of a chase. I haven’t been in the mood for an action comic book in a while. Or perhaps I haven’t really cared about the action in a deep meaningful way.

I like that the heroes “rescued” Doctor Forrest from Golden and her goons. Especially since they don’t trust him. But because they are the heroes they do show him mercy and try to take care of him. I love that Van Meter included a transgendered character, Jake, in her story. His story was handled really well. (Though I’d expect no less.)

I’m still not enamored with this story, but I’m glad to see that it’s been slowly picking up some steam. I’m a little disappointed that this medical story is based on gender. But I’m glad that Golden is a woman.

Also, as usual, Iron Man is a dick.

This wrapped up pretty nicely, and it was definitely more engaging in the last two issues than those before it.

Van Meter’s take on the Avengers and their secrets is interesting. Also how often they go “rogue” from each other. Which really has more to do with all of them having their own books than anything else. I don’t know how I feel about the secrets and Hawkeye’s ending to the story. I get it, but I don’t know if I agree on the characterization, especially post-Steve’s death in Civil War (and resurrection).

I liked the Angela Golden reformed at the end. That was really quite the risk that Doctor Seth Forrest took in order to get all his successful test subjects rounded up. Seriously, exploding armored van fleeing the scene. I do appreciate that none of them trusted him whatsoever.

I always find it interesting just how quickly people learn to use their powers in the Marvel U. So I’m glad that Van Meter made the newly-powered that don’t have that much training/experience be a little clunky.