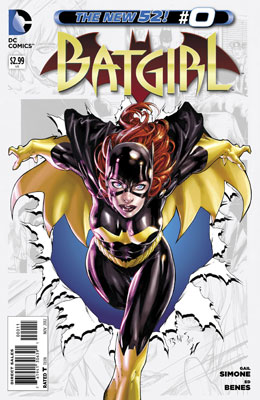 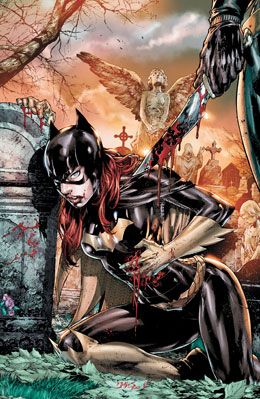 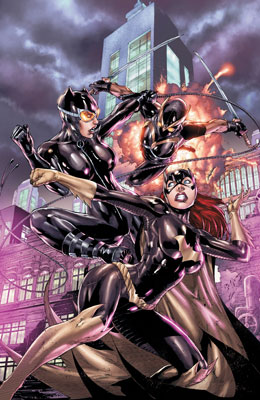 I didn’t really know what to think about these “0” stories. I do like the effort that DC’s realizing everyone is so confused and that they’re trying to fill in some backstory. As surely any writer worth their chops will have some backstory fleshed out for their characters.

I liked this issue a lot. It’s probably my favorite one Simone has done in this new reboot. I adored all the adjectives that people described Babs with and she knows they all really equal “weird.” Which is going to do wonders for readers being able to identify with her story.

I appreciated that Babs was older when she picked up the cape and cowl. That she only did it for a short period of time before giving it up on her own. That she chose to put it down.

The hints of James Jr being crazy were good. Henry X might’ve been a baddie, but Simone did a great job at weaving truth through his prophecy.

I felt genuinely scared for Babs and Dwight Morgan’s fate against Henry X. The book felt very real. The pacing was perfect.

I’m glad that Simone didn’t show the Joker shooting. We all know what happened.

My only kind of “what the hell” moment is when Batgirl’s drawn as fighting Psylocke. That’s Psylocke down to the costume coloring plus a snake tattoo. What the heck, Benes?

Simone did a great job at wrapping up Knightfall’s story. While I called the killer of her family, Trevor, being in the cage and her torturing him, what I didn’t call was Trevor being her boyfriend.

I’m so not a fan of Benes’ art. Here it seemed more sloppy than normal. Especially the fighting. Though I think Batgirl’s legs were shorter than Benes usually draws women’s legs.

Obviously someone has figured out Babs’ secret identity. I’d guess that it’s James Jr. Especially with the cat, the hiring on minions, and the reliving of The Killing Joke. I have to say that I’m still shocked Simone didn’t erase this entire story from DC continuity. Maybe an editorial mandate? Maybe she wanted to subvert it? Couldn’t see Babs story without it? I suppose we’ll see in the upcoming issues where the Joker comes back to Gotham.

I’m a little surprise that Batgirl wasn’t more shocked by the name of the cat, considering all the setup that Simone did about it.

I thought Simone did a wonderful job at paralleling the story of Babs and Ricky with that of Selena and Mary. I’ve always appreciated when writers give a more nuanced view to Selena, and Simone definitely excels there. (Perhaps she should’ve been penning that horrible Catwoman book?)

I’m kind of glad that they revisited Mary and the Owls because really the treatment a few issues back seemed too short and out-of-the-blue. Plus, Mary needed more characterization. And I always appreciate when writers take a good hard look at Gotham’s penal and mental health system. Which is perhaps the most broken down one in the universe.

The revisiting of Ricky was also great. I love that he’s not completely reformed, but clearly has a thing for Babs. (Even if the kiss was just a cover.) Plus, we get to see that Batgirl’s getting a reputation for kicking criminal butt.

I know that Babs is our hero here, but Gordon really seems way over his head. More than normal. You’d think he’d notice that James Jr. was missing.

I really enjoyed Wijaya’s art. Especially in the fight scenes with Babs at the beginning. The photo realistic style was pulled off well. Sampere’s pencils weren’t bad either. In fact, I enjoyed them both a lot more than the regular artists that have been on this book.