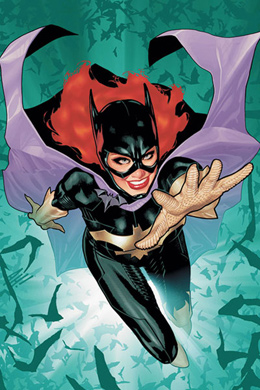 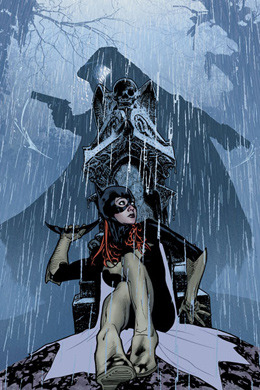 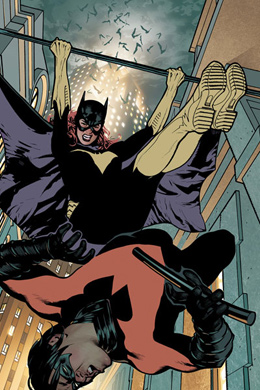 Color me disappointed that The Killing Joke continues to be a storyline that happened in the new DCU continuity, even if Babs wasn’t paralyzed permanently from it. I have such ISSUES with this. I mean, if you’re going to take away the most recognizable superhero who’s a person-with-disabilities to make her Batgirl again, okay that majorly sucks for visibility for people with disabilities, but at least you could’ve erased a freaking misogynistic awful story from continuity too. And I’m feeling total editorial mandate on this one given how much Simone is on record saying she hates The Killing Joke.

I mean, I trust Simone to deal with this well. Just as she did in Birds of Prey, in the old DCU. But still, a reboot seems like the perfect place for that relaunch, for The Killing Joke to have never happened. (Except that the reprints of it still sell like hotcakes with fanboys.)

In other news, I’m happy for the start of a friendship between Babs and her new roomie. (Who’s nameless?)

Syaf’s artwork is only okay. I don’t have any complaints (except perhaps that I see too much of the Joker’s chest), but it doesn’t impress me either. Not what I expected for a title which has been getting a lot of press.

This title continues to be only mediocre at best. Syaf’s art is not my favorite. However, I rather like Detective Mel McKenna. She seems really awesome, and I hope that she either becomes Batgirl’s helper or a cape herself at some point. I think they would make a great team.

Still don’t know how I feel about the Mirror dude. His reveal as a man who’s family died for no reason and he was saved seems a little blah. It doesn’t account for how he knows about people who “should’ve” died but didn’t. This seems like Spectre territory.

I like that Babs hasn’t perfected her Batgirl skills yet and that we see her beat up after her fight with the Mirror. I also appreciate that Alysia Yeah, her roommate, calls her out on being injured and isn’t going to let her new roomie be beat up.

I’m glad Babs is dating. However, Gregor the physical therapist looks a lot like a certain Dick Grayson.

I feel like Batgirl‘s starting to pick up. It’s not quite there, but I have more hope based on this issue than the last few ones.

As much as I like it when superheroes don’t win 100% of the time, Babs seems not to be able to catch a break while fighting this Mirror dude. She’s hanging off a train, but a ton of people still die. Somehow I don’t think the GPD’s going to be too happy if they find out that she was warned beforehand, but didn’t contact them.

The entire Babs feeling that her life is different and taking life-by-the-reigns new philosophy seems a little forced. Again, there seems to be some editorial mandates happening which are leaving me cold. Not to say that everything Simone writes I automatically love, it’s just that the emotions coming across generally don’t leave the cold feeling.