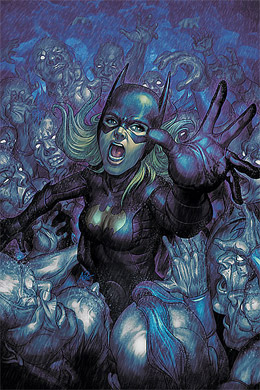 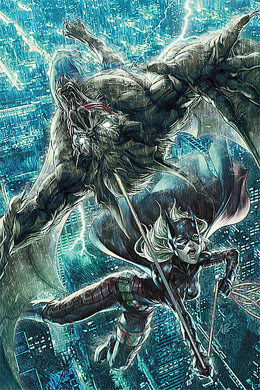 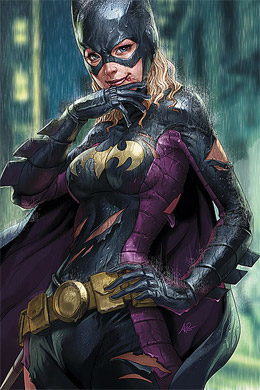 The Calculator is certainly one messed up, sick guy. However, I’m not so sure how enamored I am by this techno-virus which makes everyone attack Stephanie and Babs. I’m just not quite feeling it.

I love that the Batgirl cave has a secret kitchenette.

I also loved the parts about inner monologue issues, and the things that both Stephanie and Babs say out-loud that they don’t mean too. I’m really glad Stephanie ran into Nick in Babs’ office. I was so hoping Miller wasn’t going to go for the two friends have a crush on the same guy and fight over him stereotype, and this little scene makes me think we won’t have that train-wreck happen. I do like how slightly disappointed Stephanie is that Nick doesn’t recognize her out of costume.

I love the artificial, not-quite-right world in Babs’ head. I love that she’s living in the suburbs away from harm, which makes her dad extremely happy, and that she’s married to Dick, which makes her happy. Though she can’t be that thrilled to be serving food to Damien and Tim. In her fantasy, she both pleases herself a bit and pleases her father and Dick. I love Jim and Babs’ father-daughter dynamic, even if he is a little overly protective.

I also like how things from the missing world bled through: Bruce’s absence from the table, Jim referring to the turkey as a Bird of Prey, a man dressed as the Joker showing up at her door. Miller also does a great job with the Calculator here; he may be brilliant enough to capture Babs and figure out she’s Oracle, but he doesn’t really know anything about her and can’t interpret her dreams/nightmares.

Stephanie’s monologue about being screwed is too perfect here. Pitting her against both Catwoman and Huntress is also great. They are two of Gotham’s more impulsive fighters, much like Stephanie herself. And because of that impulse, it is more believable that Stephanie can get away from them.

I love Babs setting up Wendy to become a hero. Babs knows exactly what Wendy’s going through. She knows what it’s like to be a hero (or working with heroes) and then be paralyzed and sent off due to her disability. Babs understands that Wendy doesn’t want to live a normal citizen life.

Man-Bat had to have smelled bad. Sewer + fur = yuck.

Figures that Babs would turn the Calculator’s mind-trap for her in on itself.

This is such a stellar series. I really love it, and I hope others are reading it and enjoying it just as much as I do. Batgirl is one of the strongest titles being put out by DC right now.

I loved Babs exploring the Calculator’s mind. She found all his weaknesses. While at the same time, she still tried to save him. She still tried to let him come around. To have him put a stop to his own evil plot. When Bab’s saw how he’d been abused as a child, she wanted to help him break that cycle.

Of course, Wendy was the one who broke the cycle. She and her brother had broken away before, but Wendy was never really a hero until this moment. Wendy was brave and grieving at the same time. No one else could’ve put the Calculator in his cyber-coma other than her. Heartbreakingly beautiful.

I also love how this sets up the book to make it okay if Babs is off with Birds of Prey instead of always there for Stephanie. Wendy will be Proxy.

As for Stephanie, the comic opens on a brilliant note having her say, “I’m Batgirl” and ends on one as well with her off to fight villains in Gotham with Proxy guiding her. Stephanie may still be impulsive, but she’s growing.